Manchester Walking Football May 2017 saw quite a dramatic finish to events before the league winners and runners up placings were announced.

With Vintage Celtic leading the combined divisions table by only 4 points from newly promoted Nash Amblers it was never a formality to assume they would win the league. As manager I was faced with the unavailability of the leagues leading goalscorer at the time as well as missing our chief play maker, and also the fact that another important player for us could not manage all the games due to other commitments.

In the 20 games in this Manchester Walking Football May 2017 session, an incredible 10 fixtures resulted in 0-0 draws. Only 16 goals were scored in both divisions, 8 in each. The other 10 fixtures resulted in six 1-0 wins, one 1-1 draw, a 2-1 win, a 2-0 win and the biggest score on the day, a 3-0 win for Rochdale AFC Strollers over Bolton Wanderers.

In Division 1 the contest for the league winners began with the top 4 teams playing each other on adjacent pitches. Vintage Celtic, leading the league by 4 points, drew 0-0 with the excellent Rochdale AFC Strollers who always give opponents a tough game. Second placed Nash Amblers, fielding a new look side, beat Chadderton FC WF 1-0 to reduce the deficit to 2 points.

Next up was Chadderton FC WF and Vintage Celtic. Chadderton always seem to have the upper hand regarding possession in these games and this was no exception. However both teams aren’t prolific scorers and it ended in a 0-0 draw.

Celtic’s next game in this Manchester Walking Football May 2017 session was versus Bolton Wanderers and despite having both more of the possession and goal scoring opportunities, Celtic couldn’t put the ball in the net and this also ended in a 0-0 draw.

Now a win for Nash Amblers would give them a joint top place, level on points with Vintage Celtic. In the event they were beaten 2-1 by Rochdale AFC Strollers. So Celtic still had a 3 point advantage at the top of the table.

Celtic’s fourth game in succession was the match, and possibly the decider, against Nash Amblers. A draw for Celtic meant they couldn’t be overtaken even if the Amblers won their final match. As it turned out both teams cancelled each other out. Celtic had slightly the better of the possession but neither team threatened the oppositions goal, resulting in a 0-0 draw.

It was all of no consequence as Nash Amblers drew 0-0 in their final fixture against Bolton Wanderers, who finished bottom of Division 1 and find themselves back in Division 2 for the Autumn league.

In fact as results proved on the day, there is very little to separate all the teams in Division 1. Strangely enough, due to 4 draws on the day, and despite winning the league, Vintage Celtic came close to being relegated for the Autumn league.

Rochdale Striders, relegated from Division 1 after the April session, were the dominant force in Division 2, winning 2 and drawing 2, to collect 8 points and gain a rapid promotion back to Division 1 in the Autumn league.

Both the Blackpool sides had identical records in this Manchester Walking Football May 2017 session with a win, 2 draws and one loss apiece and a total of 5 points each.

The improving Maccabi Old Codgers gained their second win of the campaign, and with a draw and 2 losses, moved off the bottom with a total of 4 points.

Blackpool’s near neighbours, Fleetwood Town Flyers, gained 3 points from 3 draws and one loss and prop up the Division 2 table. Their place in Division 2 is safe however as any new teams joining the Autumn league will go straight into Division 3.

There has been some controversy and questions as to how the league winners and runners up would be assessed due to differing number of games played. The problem was that we started with 4 teams in each division and with Bolton Wanderers joining the league in March there were then different numbers in the two divisions and therefore more games were played in Division 1 due to there being an extra team.

It became 2 divisions of 5 teams in April when AFC Blackpool Very Senior Seasiders joined division 2. It was felt that the only fair way to assess the winners and runners up was to have a combined division table for this season only. With the teams originally allocated to the two divisions by a draw, it was hoped that having promotion and relegation after every monthly session, that to coin a phrase – “the cream would rise to the top”.

Eventually it has all worked out as we hoped when we started the league in February. With points harder to come by in Division 1, as the promoted teams moved up, we felt it would finally prove to be the best solution.

This has indeed happened and arguably the system has worked as the Combined Divisions Final Table indicates. It would be hard to argue against points gained, goal difference and the average points per game achieved. It could also be argued that Bolton Wanderers and AFC Blackpool Very Senior Seasiders would be higher in the table if they had played more games, working on their average points per game played. This is quite possible but unfortunately their late arrival in joining the league didn’t help their cause. 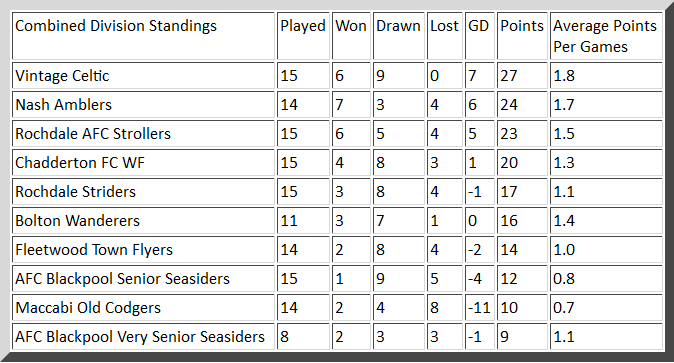 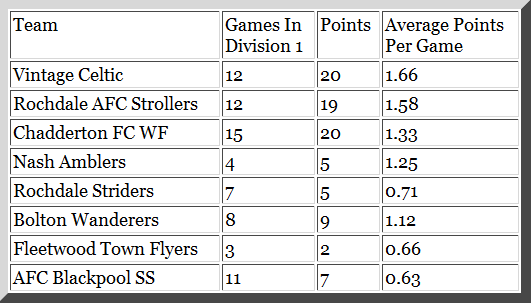 An alternative method of deciding winners and runners up, and arguably a fairer way, could have been games played in Division 1 and points average per game. Using this method the winners would still have been Vintage Celtic but the runners up would have been Rochdale AFC Strollers not Nash Amblers. Whichever method had been chosen, it wouldn’t have suited everyone.

In the Autumn league, promotion and relegation will be decided the traditional way after all four monthly sessions have been played.

Not many would argue against the fact that the league has been a great success. The venue, pitches and referees have all been first class, the standard of play excellent and the sportsmanship, despite being competitive, has been exemplary.

The commitment of all teams is appreciated and hopefully you will all return for the Autumn League. Let’s hope that this Greater Manchester Over 60’s Walking Football League can become the benchmark for all future walking football leagues.

Although originally it was my idea to form an Over 60’s league, without the input of Paul Gardner and his Link4Life team it would never have happened, so a big thanks to them all.

The Chief Executive of Link4Life Gillian Bishop agreed to present the trophies after this final Manchester Walking Football May 2017 session of the Spring league.

The first presentation was a bottle of wine to the player we thought had showed true sportsmanship and camaraderie in the league. This deservedly went to AFC Blackpool Senior Seasider’s Steve Hyde, a really nice guy who is also an excellent goalkeeper. Steve at one time was in contention for the Golden Gloves trophy.

Next up were our excellent band of referees, Dave Brooks, Alan Graham, Matt Howells and Mike Willmore who were presented with medals, and in Matt’s case a pint jug, for their endeavours in this Spring league. Although I have seen the odd referee in walking football who has been of a high standard, it’s great that we have 4 of them all in one place.

A surprise trophy, and one that gave me great pleasure to see, was the Golden Gloves award to our own keeper, Mike Kieran. Out of the 15 games Vintage Celtic played in this Spring league, Mike has kept 14 clean sheets, with the only goal against an own goal at that.

The Golden Boot award went to AFC Rochdale Stroller’s Terry Williams. Terry scored 4 goals in this Manchester Walking Football May 2017 session to make his total 7 overall. Terry’s nearest rival was Vintage Celtic’s Paul O’Neil with 5 goals. Paul was unavailable for this session and gutted that he couldn’t try to add to his total. Whether he would have tied with Terry or even beat his 7 goals we will never know. Congratulation to Terry for his achievement.

The ever improving new look Nash Amblers took runners up spot beating AFC Rochdale Strollers by one point and look to have comfortably settled into the top division. This was their first trophy in competitive league walking football and I am sure it won’t be their last.

Finally, the top award, the league winners, went to my own team Vintage Celtic, who despite being short of key players in this Manchester Walking Football May 2017 session, held out to win by a 3 point margin. With no losses in the 15 games played and only 1 goal conceded, it would be churlish of anyone to deny that they were worthy winners. Unfortunately our problem is scoring goals, any top strikers fancy a move?

Feel free to leave a comment below on how you felt the league has turned out. Did you agree with our method of deciding the winners and runners up, or indeed do you have any suggestions as to how we could make it better for future seasons.