After the frustrations of no full league football since the Autumn December session in 2019, it was good to see some old faces and friends we hadn’t seen since the pandemic. Almost two years of little activity saw us all a little older and also a few changes in the teams age categories.

The over 60s saw a reduction of teams from twenty to eighteen, while the 65s saw an increase from fourteen to sixteen, as expected a natural progression. The over 70s remained the same with eight teams competing.

Manchester Walking Football September 2021 kicked off the Autumn league on the 2nd of the month. Divisions 1 & 2 of the over 60s took part on this day.

In Division 1, Manchester Corinthians head the table with three wins and one draw. Wakefield Wanderers, champions in the 2019 Autumn league, are second two points behind the Corinthians with two wins and two draws. In third place former champions Rochdale AFC Strollers, and still a strong team, had one win, two draws and one loss, and are three points adrift of the Wanderers.

Fourth spot sees Bury Relics, normally one of the contenders, with only two points from two draws and two losses. Bolton Wanderers Walkers prop up the table with one point from one draw and three losses.

In Division 2, Club Kingsmaid, another really strong side, top the table with four wins and a maximum twelve points. On nine points, the rejuvenated Blackpool FC Senior Seasiders, are in second spot with three wins and one loss.

Fleetwood Town Flyers with two wins and two losses are in third spot and Manchester Corinthians Whites are in fourth position with one win and three losses. Purple Panthers WFC lost all four of their fixtures and are bottom of the table with no points. Three points separate all five teams in Division 2.

Divisions 3 and 4 were played on the 9th and Paul Gardner was back to give the briefing. A minutes silence was again observed for those we have lost since December 2019. With only four teams in both Divisions it was decided that the games would be twelve and a half minutes each way. After the event some players complained that seventy five minutes football was too much, so as from the October session this will reduce to twenty minute games.

Rochdale Striders top Division 3 on nine points with three wins, followed by Preston North End Senior Whites on six points from two wins and one loss. In third and fourth spot are Salcom and Maccabi Old Codgers respectively, both with one draw and two losses. Salcom edging Maccabi with a goal difference of one.

A late alteration to the fixtures was needed in Division 4 with Carlisle SOA unavailable. This was due to their players being in contact with a team mate from Sundays Martin Dawson Trophy and him testing positive for Covid the following day. This meant that with only three teams contesting Division 4 on the 9th, their two fixtures were of thirty minutes duration.

With Carlisle SOA unfortunately not taking part, their opponents on the day were awarded 1-0 wins. They are a good side and I wouldn’t be surprised to see them still contesting this division despite this setback.

Moston Brook and Roach Dynamos both had two wins and one draw and jointly head the table on seven points with the same goal difference. Rochdale Wanderers are in third spot on three points with one win and two losses and the unfortunate Carlisle SOA in fourth.

Divisions 1 & 2 of the over 65s league kicked off on the 16th September. A minutes silence was again held for those we have lost since December 2019.

In Division 1 Bury Relics had a good start and lead the table on ten points with three wins and one draw, closely followed by Rochdale AFC Strollers on eight points from two wins and two draws. Manchester Corinthians, not at their best today, had two wins, one draw and one loss giving them seven points.

Salcom are on three points with one win and three losses. Manchester Senior Citizens are bottom of the table, not on playing ability but their failure to complete and hand in the Fixtures/Score Sheet/Referee Gradings form despite all teams being warned at the pre match briefing. Their six points gained in the fixtures was reduced to nil after all their opponents today were awarded 1-0 wins. In future it might be a good idea if ALL players listened to Paul Gardner or whoever does the briefing instead of talking amongst themselves.

There are some strong teams in this division and no doubt it will go to the wire in December.

In Division 2 Fleetwood Town Flyers top the division with ten points from three wins and one draw. Preston North End Senior Whites lie in second spot on eight points from two wins and two draws. Third placed are Blackpool FC Senior Seasiders on five points from one win, two draws and one loss.

Division 3, played on 23rd September on a cold Heywood day, consisted of six teams and the games duration was reduced to twelve minutes. We had three new teams in this division, Bolton Arena, Club Kingsmaid and Chester Northgate who had moved up from the 60s league. 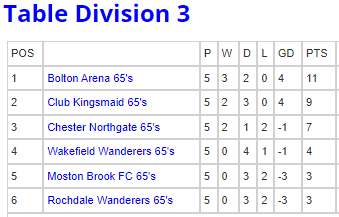 In fourth position are Wakefield Wanderers who have four points from four draws and one loss. Joint fifth and sixth on the same points and goal difference are Moston Brook FC and Rochdale Wanderers, both with three draws and two losses.

With more 65s teams showing interest it could be four divisions in next years Spring league.

Eight teams, as in the Autumn 2019 league, were involved on 23rd September in the 70s Autumn league. Once again a minutes silence was held in memory of those players and officials we have lost. The game duration in this league was eighteen minutes.

Last 70s league winners Rochdale AFC Strollers look the team to beat as they top Division 1 with three wins and leading the table with a five point advantage over second placed Blackpool FC Senior Seasiders on four points from one win, one draw and one loss.

Lying third are Salcom on four points from one win, one draw and one loss. It was a bad day for Moston Brook FC who lost all three games and find themselves in bottom spot with no points.

Thanks to all our teams, team managers or organisers, and of course our great band of referees, probably the best collection of officials of any league in the country. We are also now the largest league for the different age categories and still growing thanks to a great venue, excellent referees and good organisation, long may it continue.

Also expect some interesting developments and exciting news from the WFLA (Walking Football Leagues Alliance) after our AGM on 30th September.

The full results and tables for all September sessions are on the website drop down menu for each age category.