Named as GMWFL 65s ‘A’ and GMWFL 65s ‘B’ wasn’t a reflection on the quality of the players just a method of differentiating betweeen the two teams. The GMWFL could probably field four 65s teams of the same quality.

An early morning flight at 07:00 wasn’t the best preparation for playing walking football but at least the return fare was very reasonable. The flight was approximately 30 minutes. 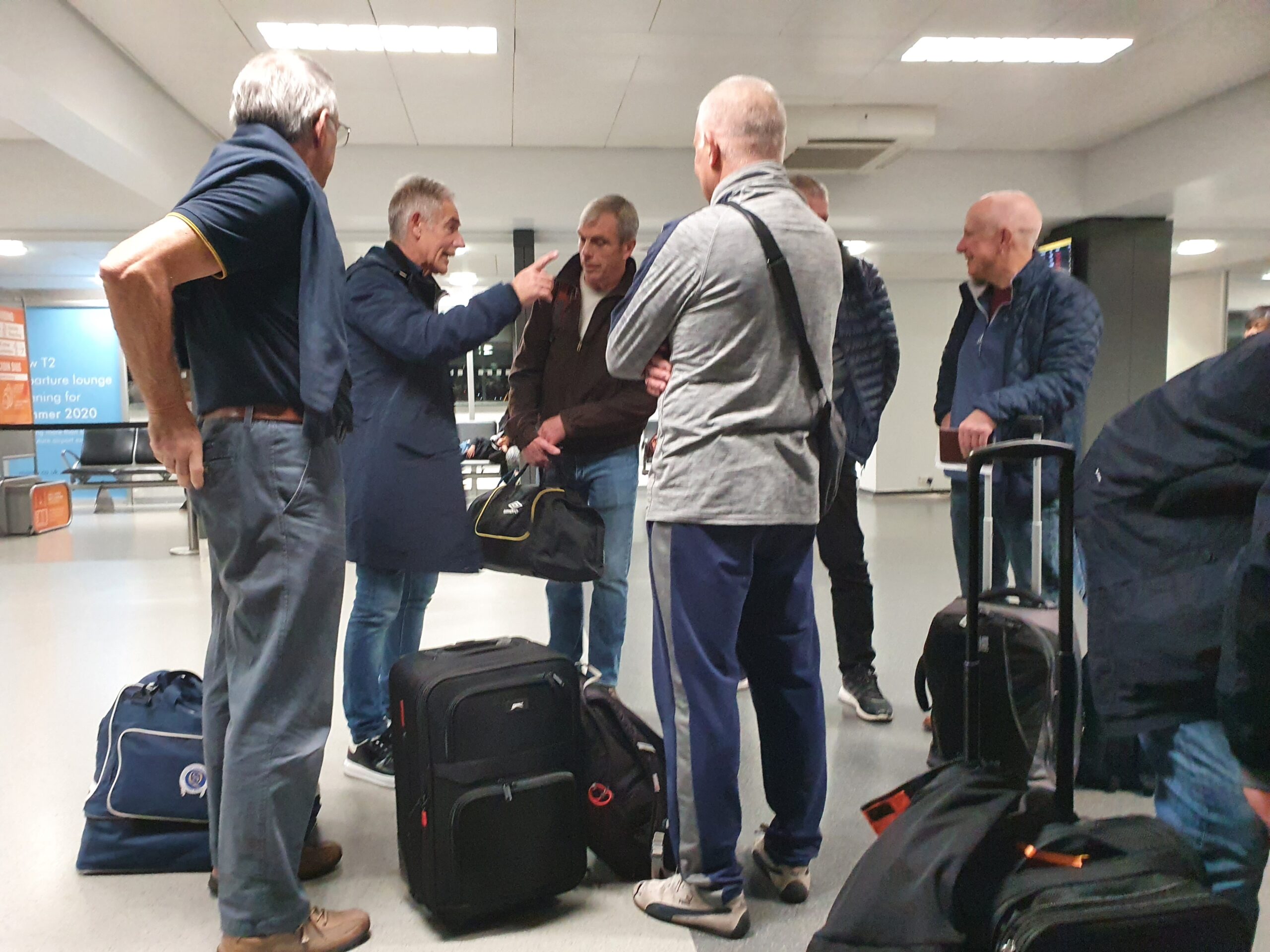 John Sander – This Is How I Want You To Play

For the fixtures we were collected by the Isle OF Man FA coach, although the description at the top obviously didn’t apply. 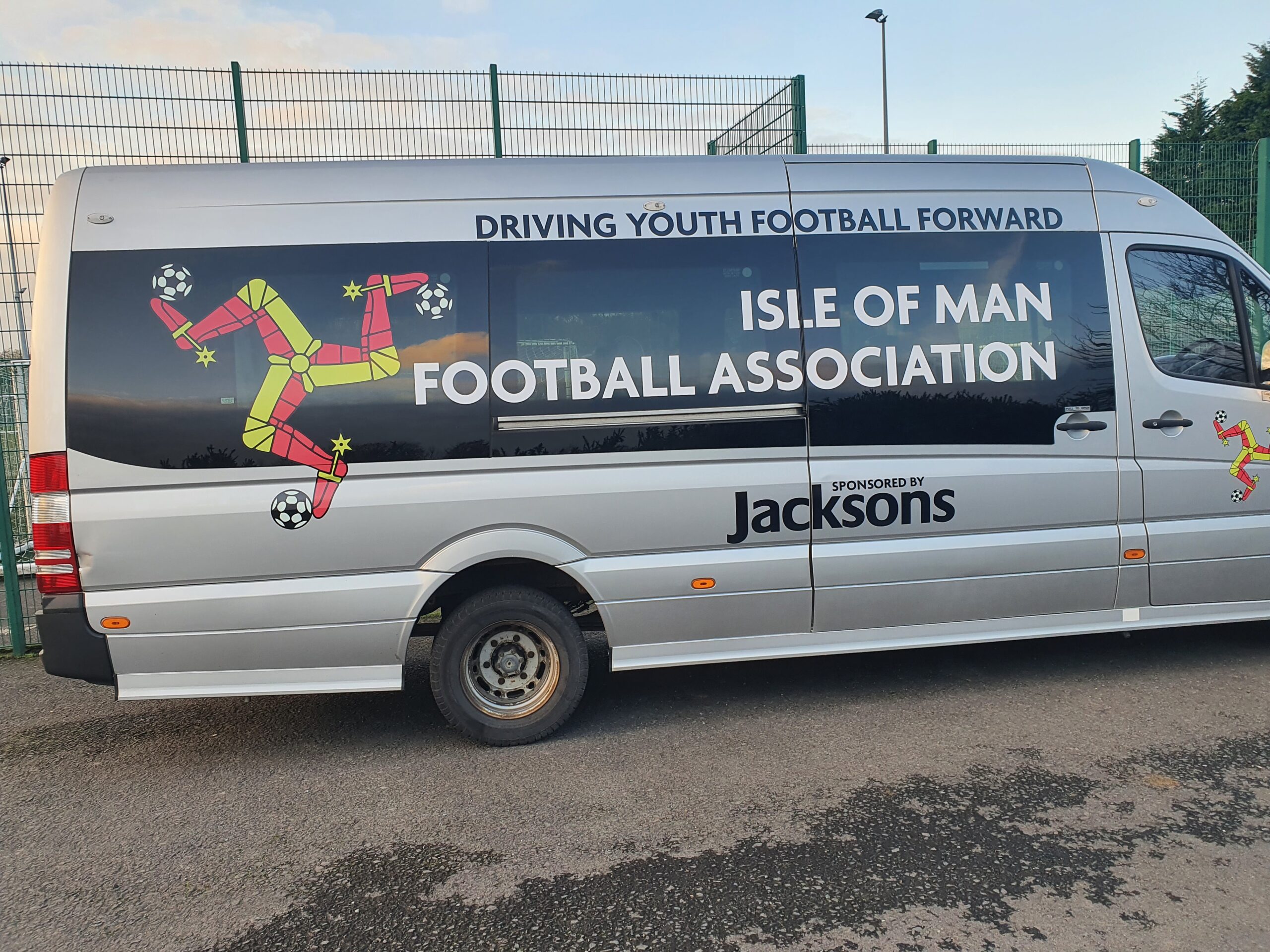 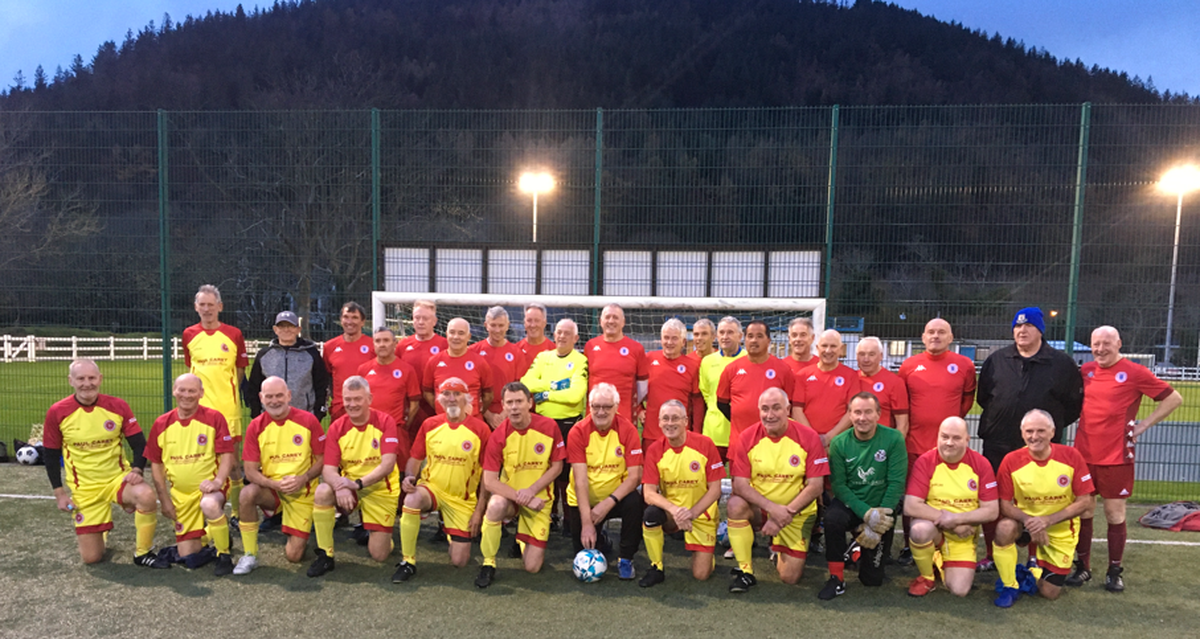 The Two Squads Line Up 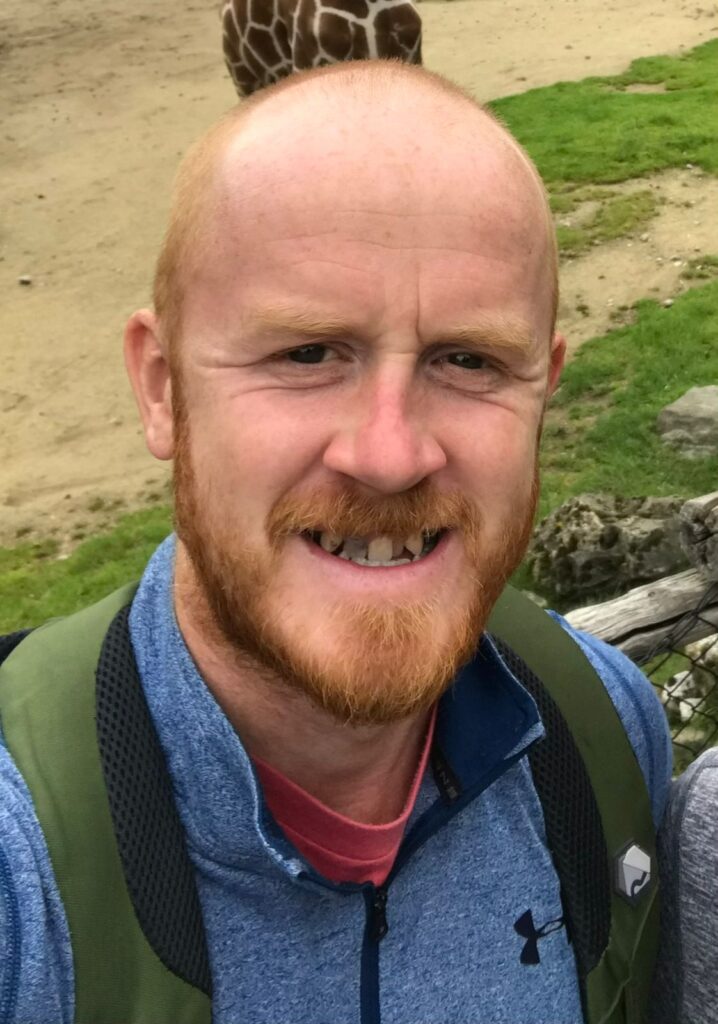 Andrew Kneale The Hero Of The Day

Early in the second half one of the GMWFL players, Ian Thomasson, went down to the ground. It seemed serious after a few seconds and suddenly everyone realised that was certainly the case. Unfortunately Ian had suffered a cardiac arrest and needed urgent medical attention.

Thankfully, one of the IOM players son in law, Andrew Kneale, came to Ian’s assistance and started CPR. Ian had not been breathing so Andrew got some air into his lungs and carried on with the CPR. A defibrillator was brought to the incident and attached to Ian, who received two shocks.

The paramedics arrived and took over with Andrew still assisting them. Eventually Ian was stabilised and whisked off to the Noble’s Hospital just outside Douglas. Obviously we were all in shock to see such a distressing incident and the games were abandonded. A massive thanks to Andrew who undoubtedly saved Ian’s life. 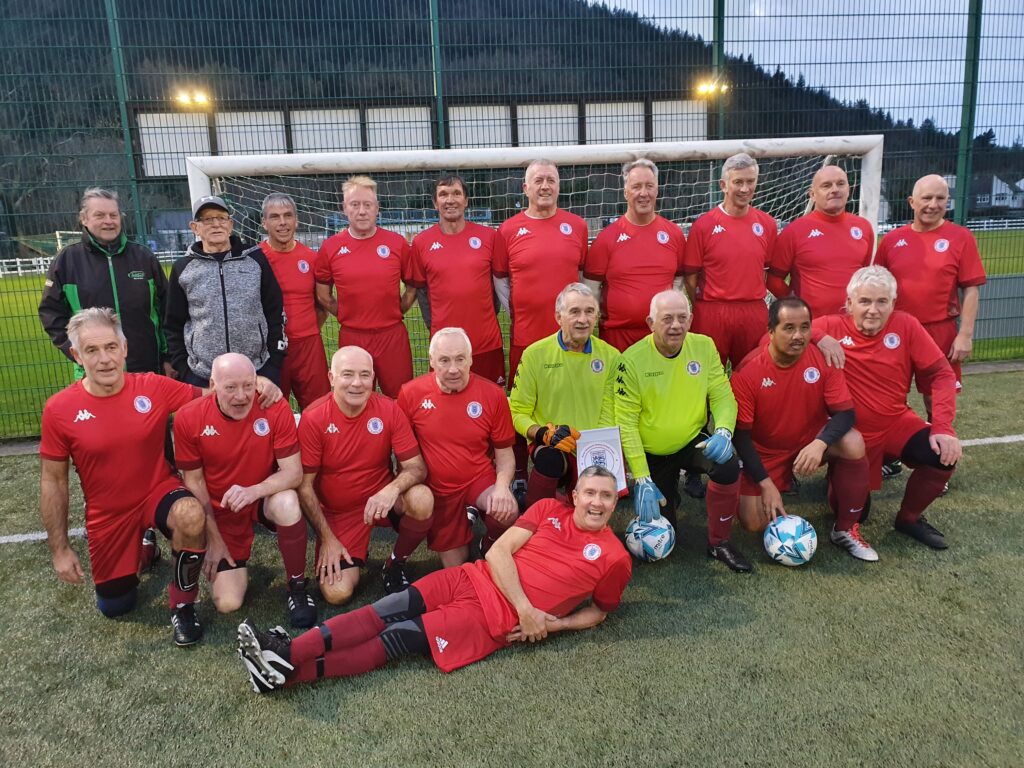 The discussion in the dressing rooms was should the planned evening meal and get together go ahead. It was felt that it was pointless cancelling as we would have to eat anyway, so we met at Jak’s Smokehouse, although the evening obviously had a subdued atmosphere. 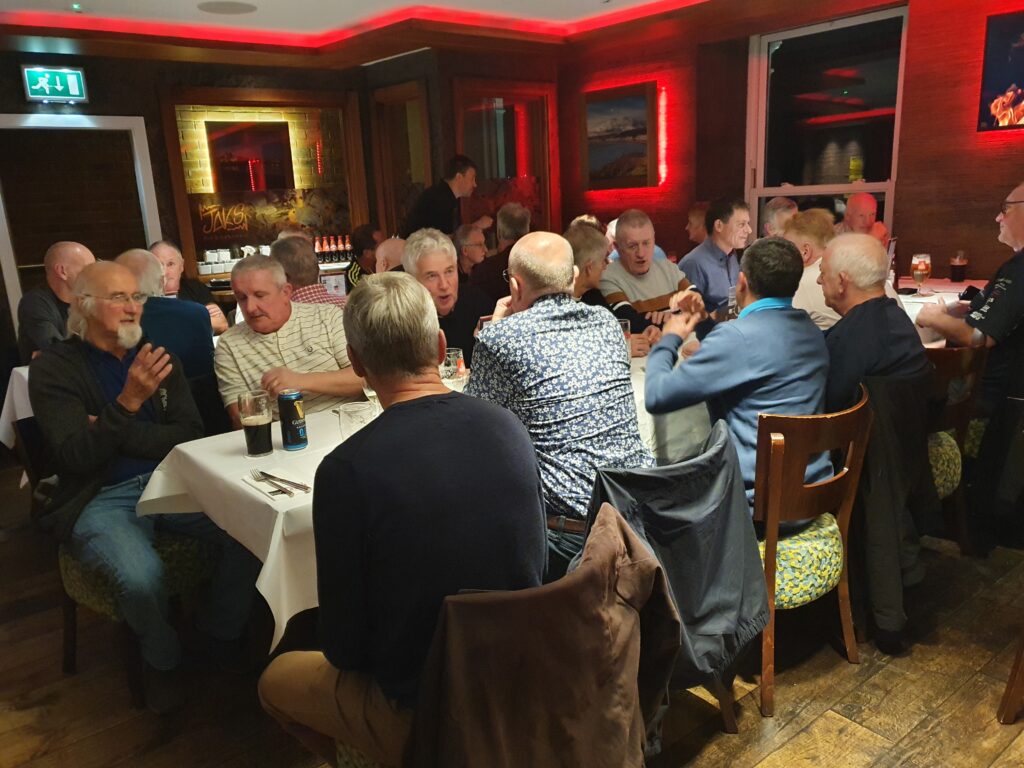 Dining & Get Together At Jak’s Smokehouse

After the early travelling and sad incident it was an early night for most, if not all of us.

Mike Sharpe, the IOM player/organiser, asked if we wanted to go ahead with the Sunday fixtures. We had a get together and Chris Kershaw said that he had spoken to Ian’s brother Neil who said that Ian would want it to go ahead as planned.

With an afternoon kick off we took the opportunity to have a stroll along the promenade at Douglas, where a wind force 6 approaching 7 was blowing. 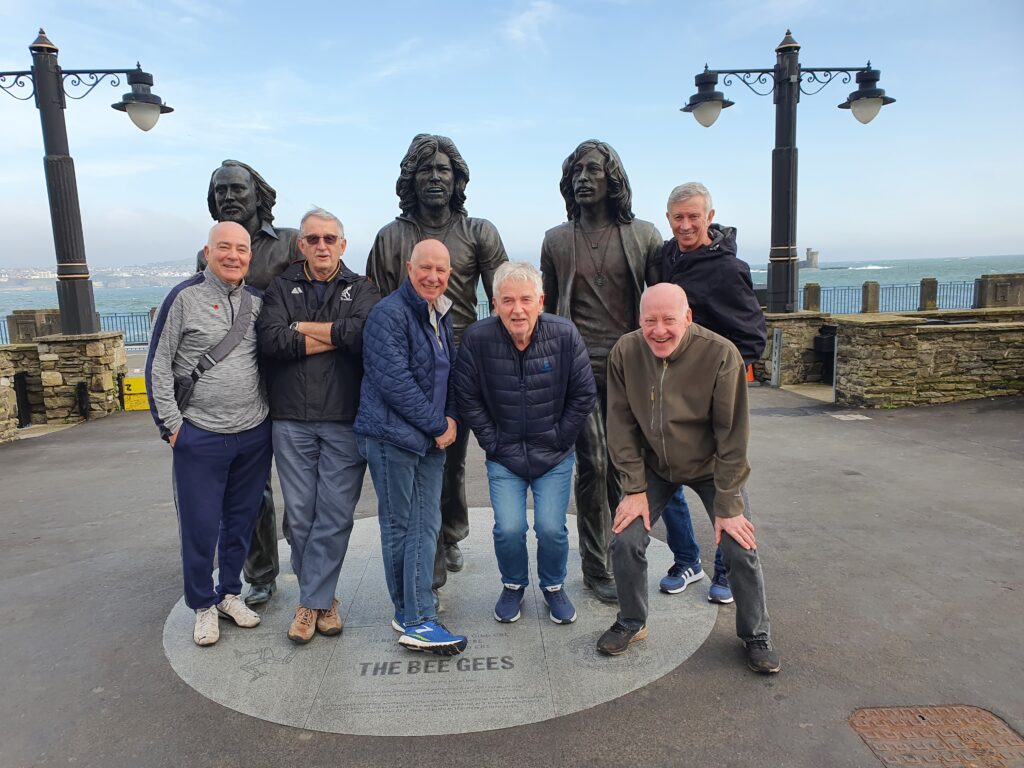 What A Great Team – That’s The Three Tall Dark Figures At The Back.

So once again we were collected by the IOM FA coach and taken to the venue at St John’s. This time the fixtures were Isle Of Man 65s ‘A’ v GMWFL 65s ‘B’ and Isle Of Man 65s ‘B’ v GMWFL 65s ‘A’. The two games kicked off and the game on pitch 1 was a tense affair with neither team giving much away. In fact it got quite heated at times and the hosts took the lead. The fixture on pitch 2 was quite the opposite with the GMWFL side dominating the proceedings.

After the incident on the previous day the results weren’t important but generally all fixtures were played in the correct spirit. For the record the results and GMWFL scorers were –

We met in the hotel bar for a pre dinner drink to discuss where we would eat that evening. Wai was taking Clint, Frank and Ron with their partners and Steve H to a Chinese restaurant, while the rest of us dined at the Fig & Olive restaurant, which was an excellent choice. 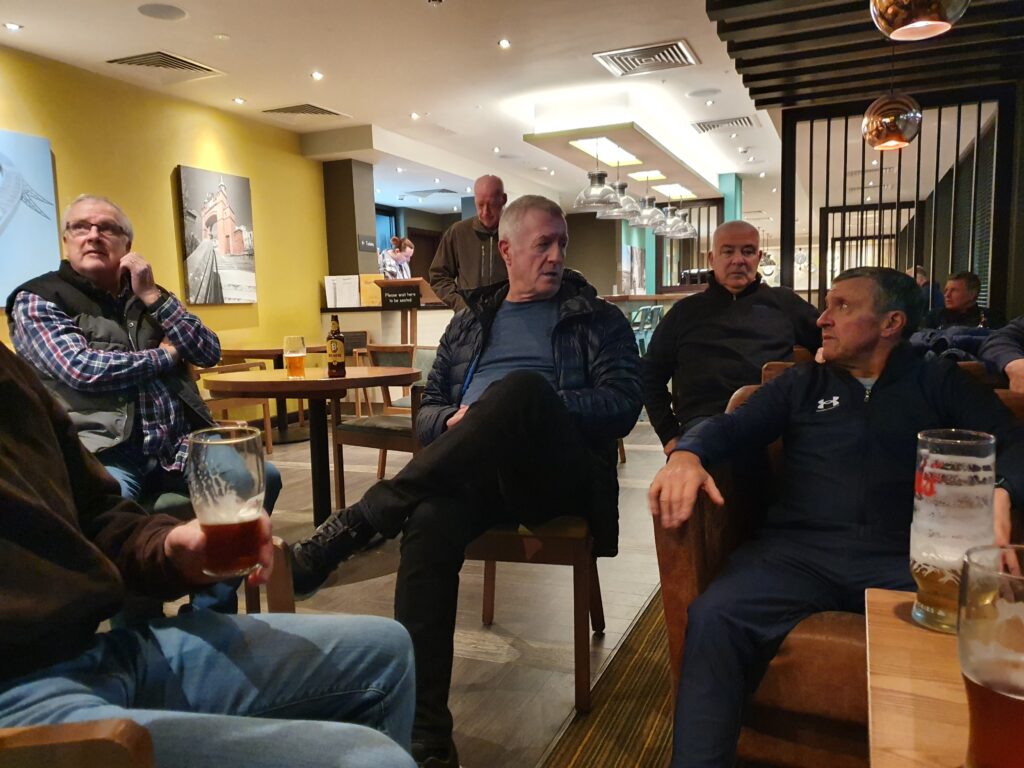 Pre Dinner Drinks At The Hotel 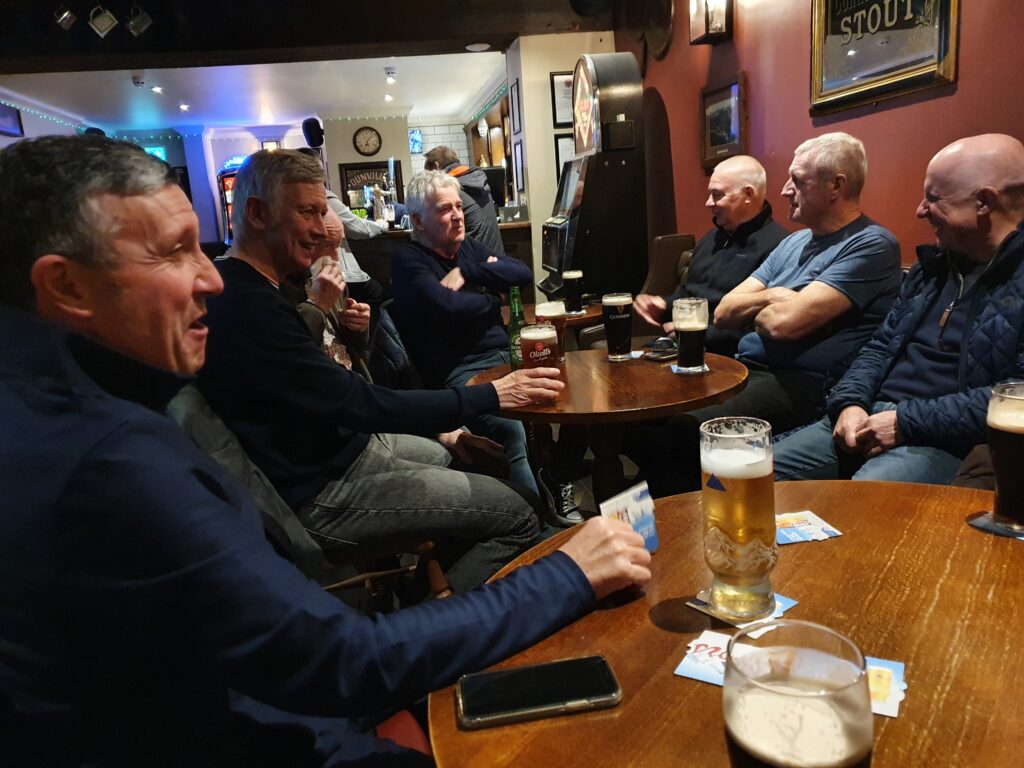 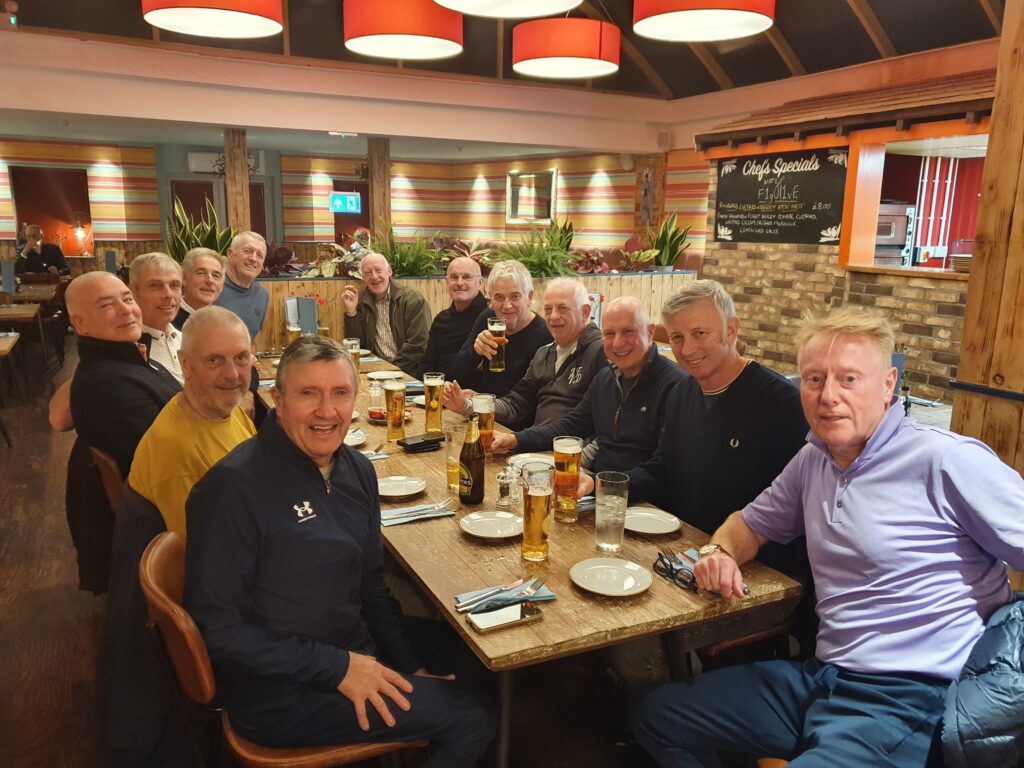 Dining At The Fig & Olive

After some excellent food we then returned again to O’Donnells Irish Bar. 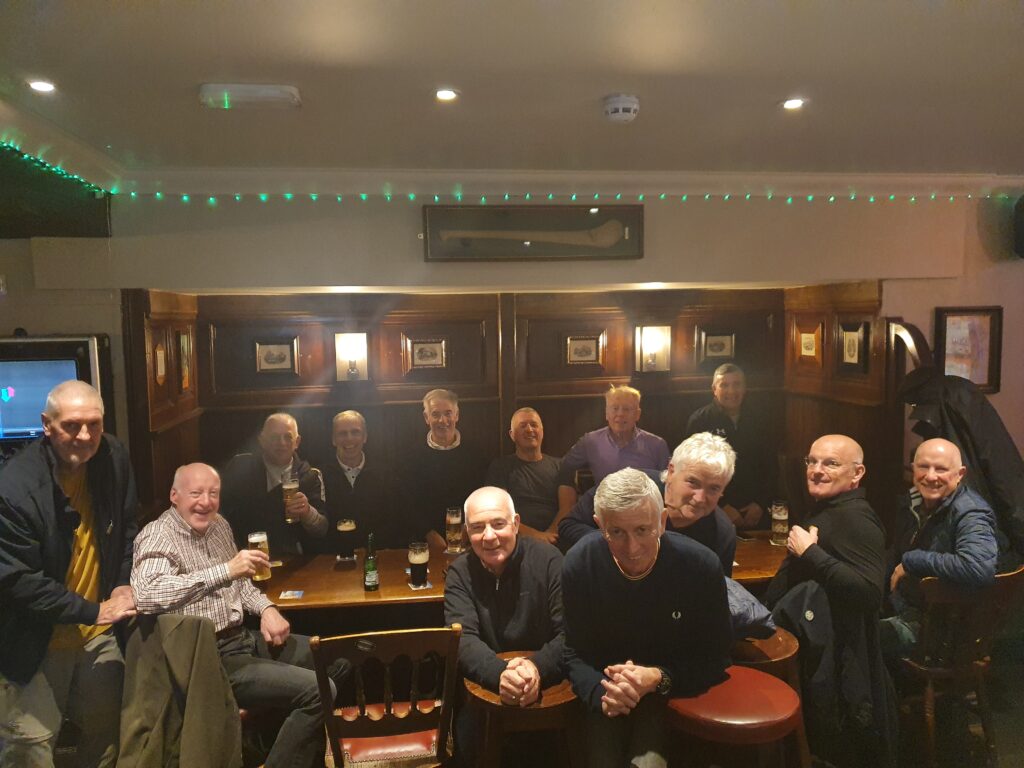 Back To O’Donnells Irish Bar

After a few drinks at O’Donnells four us us carried on in the Nags Head and staggered home in the early morning. I can only blame it on the two Carlisle lads John and Nick, plus of course our player/manager Simon. 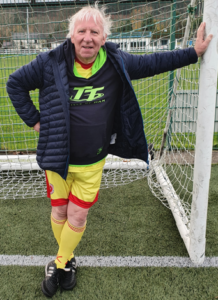 All in all it was a great weekend, marred by the incident with Ian, who we all wish a full and speedy recovery. Ian’s family flew out on the Sunday and we had a few words with them at the hotel.

Finally, a massive thanks to our IOM hosts and in particular their player/organiser Mike Sharpe who did a splendid job looking after us.

Hopefully we shall return to the Isle Of Man at some point and also host a similar weekend at Heywood some time in 2023. Also If the IOM do join the WFLA and enter the Inter League Cup, we shall meet again there next year.