Reports are continually flooding in from teams that have competed in competitive walking football matches this weekend (February 25th/26th) of widespread issues that have saddened at best, shocked at worse. Player bundled into barrier. Player kicked whilst on the ground. Out and out running. Undiluted physicality. A match halted for 45 minutes due to a serious spat. Other coming togethers, needing players separated from each other.

Young referees presiding over games they are ill-fit to officiate in. Some without the rules copy itself. Tolerance from refs that border neglect. Player health & safety at an all time low. Two teams vowing ‘never again’. WFU has all of these email accounts and is in dismay at the lack of progress made in the game. There have been incidents of this nature in previous WFU tournaments and the worry is that the trend continues throughout the rest of the year.

It appears the bully wins the playground yet again. Sour grapes from losing participants say the victors?
Not interested. They are right. The competitive game is slowly losing its footing. 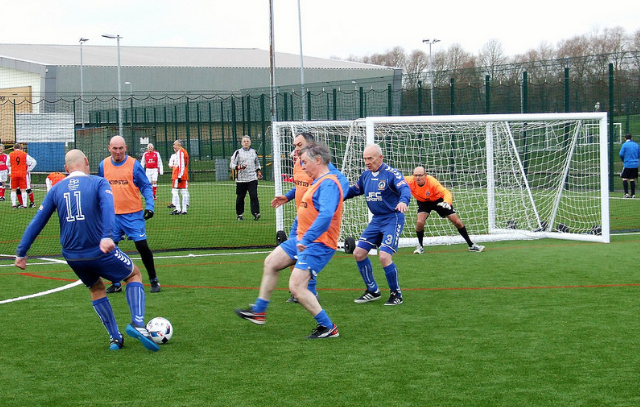 Weekend video footage is coming through Facebook and others sent on via email. In short:
What on earth do players think they are doing! Totally deluded if in their mind they are playing walking football. It is nothing but regular 50+ 5-a-side. Absolutely no consideration for the ethos. Run as you like. A dreadful indication of where the game is presently at. So why put on tournaments?

It wasn’t a consideration back in 2014 that as each year goes by, the game becomes all the more disengaged from where it was envisaged. New teams, new enthusiasm. Teams abiding by the rules brushed aside either physically or blown away by the wind of opponents rushing by.

What do the bully boys and run merchants care? I dare say that they even read the rules, embrace the ethos or give two hoots about Fair Frank or Walking Will. Is the prize that big that bundling someone’s grandfather into the barrier, or lamping someone because they put in a late clumsy one, worth the silverware and a some revisit to halcyon glory days over respect and self-respect? A dark weekend. Is there a light at the end of the tunnel?

If you’ve had a good referee this weekend, or had games played in good spirits, no issues or unwelcome experiences (and there would have been many,) you’ve been fortunate. Many haven’t and almost a dozen teams have vowed ‘never again’, and these are the teams that need saving.

Forget poor arrangements, introducing rules far too late, using voluntary referees of the centres themselves, inept officiating, poor scheduling, the problem is at this moment in time critical.

The answers will not come from the participants themselves. Far too ingratiated with their individual and collective selfishness, the game is spiralling out of proportion. Far removed from walking and gracious conduct, we will be left with only the battle hard and the bullies, the sly and the sleek participating in competitive walking football, and these teams are clearly not worth coveting at the expense of the meek and the mild.

A meeting will be asked to be convened between the WFA and the FA as soon as possible.

I will be the first to admit that we also were physical, it was a case of stand up and be counted or let the bully boys take control. As a club with an average age of 63, we Vintage Celtic, are almost definitely going to avoid over 50’s tournaments in future. I also know that Rochdale AFC Strollers, another of our members, had a similar experience in the same tournament and are likely to make the same decision.

Doesn’t make good reading does it? So please leave a comment on your views as to the question Is Walking Football Over 60’s, Over 65’s The Answer?