With the March Over 60’s league session being cancelled due to snow covered pitches and sub zero temperatures, the Manchester Walking Football April 2018 session of the Spring League saw a day of brilliant sunshine and clear skies.

With Middleton Legends joining us in Division 3, it meant the Over 60’s league was back to full strength. Thirty eight goals were scored in this session, ten in Division 1 and fourteen in both Divisions 2 and 3. As an indication of defensive and goalkeeping strength, the higher the division, the less goals were conceded and the more 0-0 draws happened.

In Division 1, Rochdale AFC Strollers increased their lead by five points over second placed Nash Amblers, with one win and three draws. The Amblers had four draws in this session to add to their three in February and remain the only unbeaten team in this division and the league.

AFC Blackpool Senior Seasiders, promoted in February stay in third spot with the same ten points as Nash Amblers but losing out on a goal difference of one. A win, two draws and a loss saw the Seasiders remain in mid table.

Propping up the table are Chadderton FC WF and Vintage Celtic, both on six points and the same goal difference. Chadderton had one loss and three draws but were still the highest scoring side in the division with four goals. Vintage Celtic finished the day with four draws.

In Division 2, Roach Dynamos, who had a one point lead over second place Fleetwood Town Flyers in February, pull further ahead in the table with three wins and a draw and now have a five point lead over new second placed team Wakefield Wanderers. Mick Tarpey was the Dynamos only scorer with four in this session.

Bolton Wanderers, with two wins and two losses, are on the same twelve points as Wakefield but miss out with an inferior goal difference of four.

Fleetwood, who drop down to fourth had one win, two draws and one loss in this Manchester Walking Football April 2018 session.

Rochdale Striders, missing their goalkeeper Alan Thompson through injury, continue their downward spiral with four losses, conceding seven goals with only one for. Always a difficult team to beat when they were in the top division, is missing Alan the only reason for their recent poor form? The Striders prop up division 2 with only one point and are almost certain candidates for relegation to Division 3.

Division 3 is tight at the top with just one point separating the top three teams. Bury Relics lead the table with Maccabi Old Codgers and Preston North End Senior Whites both on eleven points.

The Relics with two wins, one draw and one loss gained seven points to add to their five in February. The biggest surprise in this league, apart from Rochdale Striders fall from grace, is the resurgence of the Maccabi team.

In past seasons Maccabi have always managed to put out a team despite struggling for players and have always been an asset to the league. It’s pleasing to see them at last becoming a force and I for one wouldn’t bet against them winning the division and gaining promotion to Division 2 in June. With three wins and a draw, their ten points was a massive improvement on their single point in February.

Third placed Preston with two wins, one draw and one loss are on the same points as Maccabi but have an inferior goal difference of two.

Fourth placed Third Space Seniors, who had five points in February, were unable to add to their total, with four losses, conceding five goals without reply. 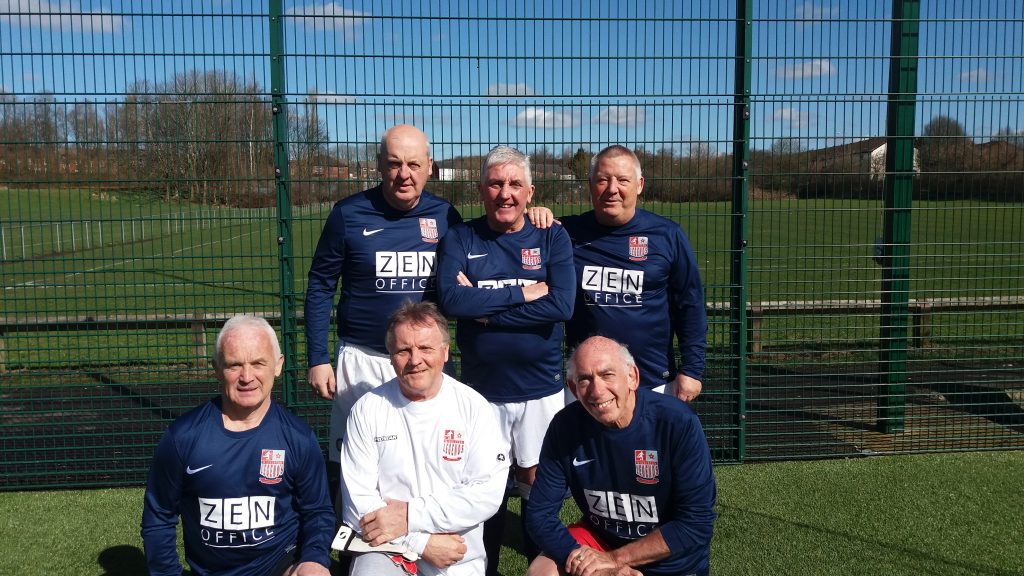 New boys to this Manchester Walking Football April 2018 session, Middleton Legends, gained a creditable four points with one win, one draw and two losses. Although bottom of the table having played three games less than their nearest rivals Third Space Seniors, they are only a point behind the Seniors. With just a bare squad of six on the day, they did well enough to suggest they won’t be bottom for long.

The Golden Boot and Golden Gloves awards are on again for the Spring 2018 league. Rochdale Stroller’s Val Mears leads the Golden Boot table with five goals, one ahead of his Corinthians team mate Roach Dynamo’s Mick Tarpey. Wakefield’s David Holbrow is also on four goals with another two players on three.

Nash Ambler’s Barry Smith leads the Golden Gloves table with just one goal conceded. Four other keepers are on two, so it will be interesting to see how this pans out in June.

This is YOUR website, so please leave a comment below, on any aspect of the Manchester Walking Football April 2018 session or the league itself. It’s easy to do.