On a sunny but cold day we were honoured by the presence of ARD German Television, who were filming a news clip ‘The Growing Popularity Of Walking Football’. With the league growing from nine teams in the first session in February this year, to fifteen teams at the final December session they certainly picked the right location.

With new ‘lads’ Third Space Seniors WFC joining us in Division 3, this filled our capacity for fixtures on a single day at the Heywood Sports Village. With other teams showing interest, our only option now is to start another monthly session on a different date in each month.

With this being the final session of the Manchester Walking Football December 2017 league, it was all to play for with trophies for each divisional winners and runners up, as well as the Golden Boot and Golden Gloves awards.

In Division 1 leaders Rochdale AFC Strollers drew 0-0 with second placed Nash Amblers to maintain their four point lead. Rochdale Striders had a good day picking up five points to add to their previous total of six points. If only they had played as well in previous sessions they may have avoided relegation to Division 2. They are going to be a force in the lower division, that’s for sure.

In the event Rochdale AFC Strollers won the league by a six point margin over runners up Nash Amblers. Chadderton FC WF finished a point behind the Amblers and for me were one of the best teams in the division, always showing great passing and movement and being sound defensively.

Vintage Celtic, the Spring league winners, fielded a makeshift team due to suspensions and holidays, and it certainly showed with four defeats, but at least they fulfilled their fixtures without disrupting the league format.

Division 2 ended up ‘as you were’ with the top three teams all gaining six points. Fleetwood Town Flyers finished runners up on twenty five points and league winners AFC Blackpool Senior Seasiders finished on twenty eight points. Bolton Wanderers A came third, a point behind the Fleetwood side. So the Seasiders find themselves back in Division 1 for the Spring league in 2018. They certainly won’t out of place and that division looks to be a highly competitive affair next year.

Maccabi Old Codgers, who lately have looked a much improved team, added three points to their similar total, up to and including last month, and unfortunately find themselves relegated to Division 3 next February. Almost always having to borrow players, they have to be applauded for sticking with it and let’s hope their fortunes change in the Spring.

The conclusion of Division 3 in this Manchester Walking Football December 2017 was a nail biting affair, going into the final game before placings were decided. With one point separating the top three teams, it was all to play for.

Wakefield Wanderers came from behind in third place, with seven points in this Manchester Walking Football December 2017 session, to top the table on nineteen points and find themselves in Division 2 for the Spring league. Leaders in November and other new boys in September, Bury Relics gained five points and finished runners up with eighteen points. The Relics beat third placed Nash Bees, who also had eighteen points, to the runners up spot on a goal difference of four.

Joining us for the final session of the Autumn league, Third Space Seniors WFC, had a creditable five points, with a win, two draws and a single goal defeat to Bolton Wanderers B, who in turn had a win, a draw and two defeats. The Seniors certainly won’t be out of place in this league come February.

All the results and tables can be seen HERE and HERE. 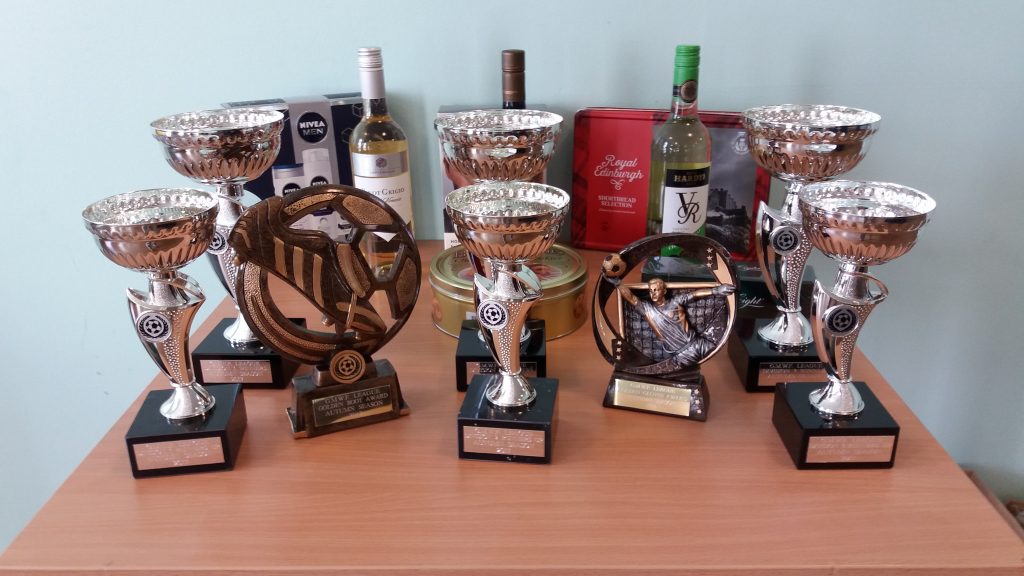 This was also filmed by ARD German TV and I am sure we all look forward to seeing the finished article. Almost six hours filming for what will be a four or five minute news item seems a lot of hard work but that’s how the industry works. It’s a pity we cannot get a half hour video of the footage. 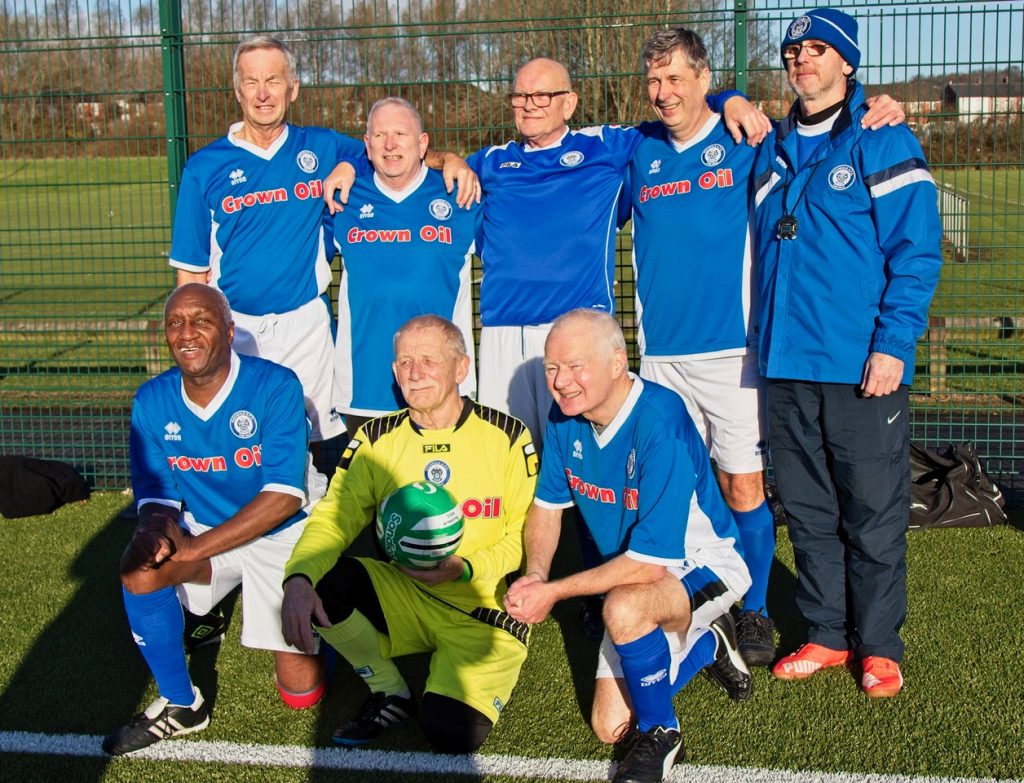 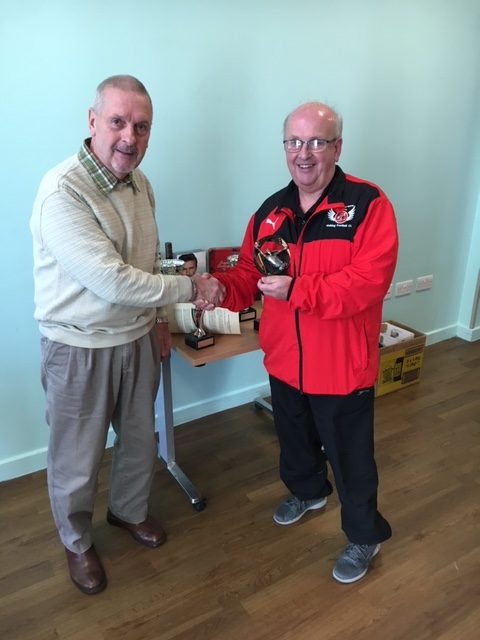 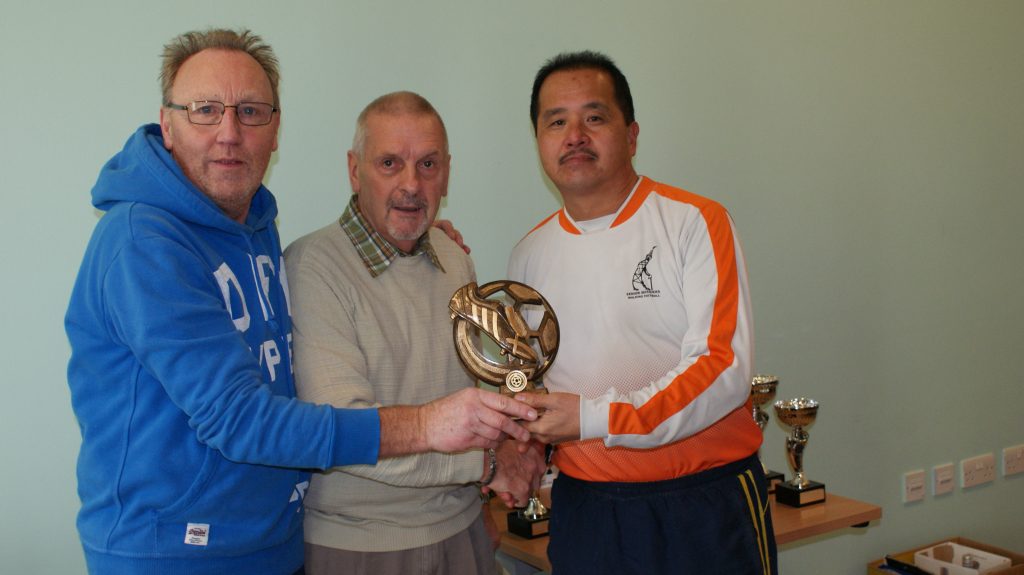 It’s been a great year for Rochdale AFC Strollers, winning the Autumn league and also winning the two Over 65’s Cup Tournaments in June and November. Their player, Steve Colesby, even won the Footgolf tournament in August.

So it’s big thanks to ARD German TV for their involvement on the day, to Barry Woodburn for his registration duties and some excellent photography, and of course to Paul Gardner who oversees the sessions with his usual efficiency, books the referees, the caterers and the excellent venue. As mentioned in Paul’s speech, the referees we have in this league are some of the best in walking football, so again it’s a big thank you to Alan, Frank, Matt and Mike.

The raffle, supported as usual by our generous teams, raised £200 for the Stroke Association, so thanks to you all for your contributions.

We hope you are all set to join us again in the Spring League starting in February and also for the Over 65’s League starting later in that month. We are also holding two Over 70’s Cup Tournaments as well as the annual Martin Dawson Memorial Trophy in 2018.

Finally, and I make no apology for repeating this every post, you have a facility on this website to advertise your weekly sessions, contact details, showcase a gallery etc. Why not take advantage of this, it’s virtually a free one page website.