Divisions 1 and 2 were played on the 1st of the month. Half the fixtures resulted in 0-0 draws, with only seven goals scored in the ten games. Before todays fixtures Club Kingsmaid and Wakefield Wanderers were tied at the top on twenty four points each with the former having a slightly better goal difference of two goals. So it was going to be interesting to see who prevailed and would become the Autumn Champions.

Wakefield drew their 11:00 fixture to take a one point lead, while Kingsmaid had no game in this time slot. Both played in the 11:20 slot with Kingsmaid drawing with Fleetwood Town Flyers, the team at the foot of the table, which by no means belied their ability. Wakefield had a 1-0 win over Manchester Corinthians Reds to now give them a three point lead over Kingsmaid, who had played a game less.

The games played were level at the 11:40 slot with Kingsmaid having another goalless draw, which meant that with two fixtures to play each, Wakefield had a two point lead. The head to head followed and this could have been the decider to see who would be Champions. Kingsmaid had to win this and their final fixture against Manchester Corinthians Reds.

The Spring 2022 season runners up, Corinthians took third spot and their lack of fire power up front proved costly with not a single goal scored in their last six games. Rochdale AFC Strollers, similarly with no goals scored today, finished fourth, while the Flyers took bottom spot, four points adrift of the Strollers despite collecting six points today. Perhaps a question of what might have been for the Flyers, who are relegated to Division 2 next Spring. I am sure that they will be straight back, they are too good a side not to be in Division 1. 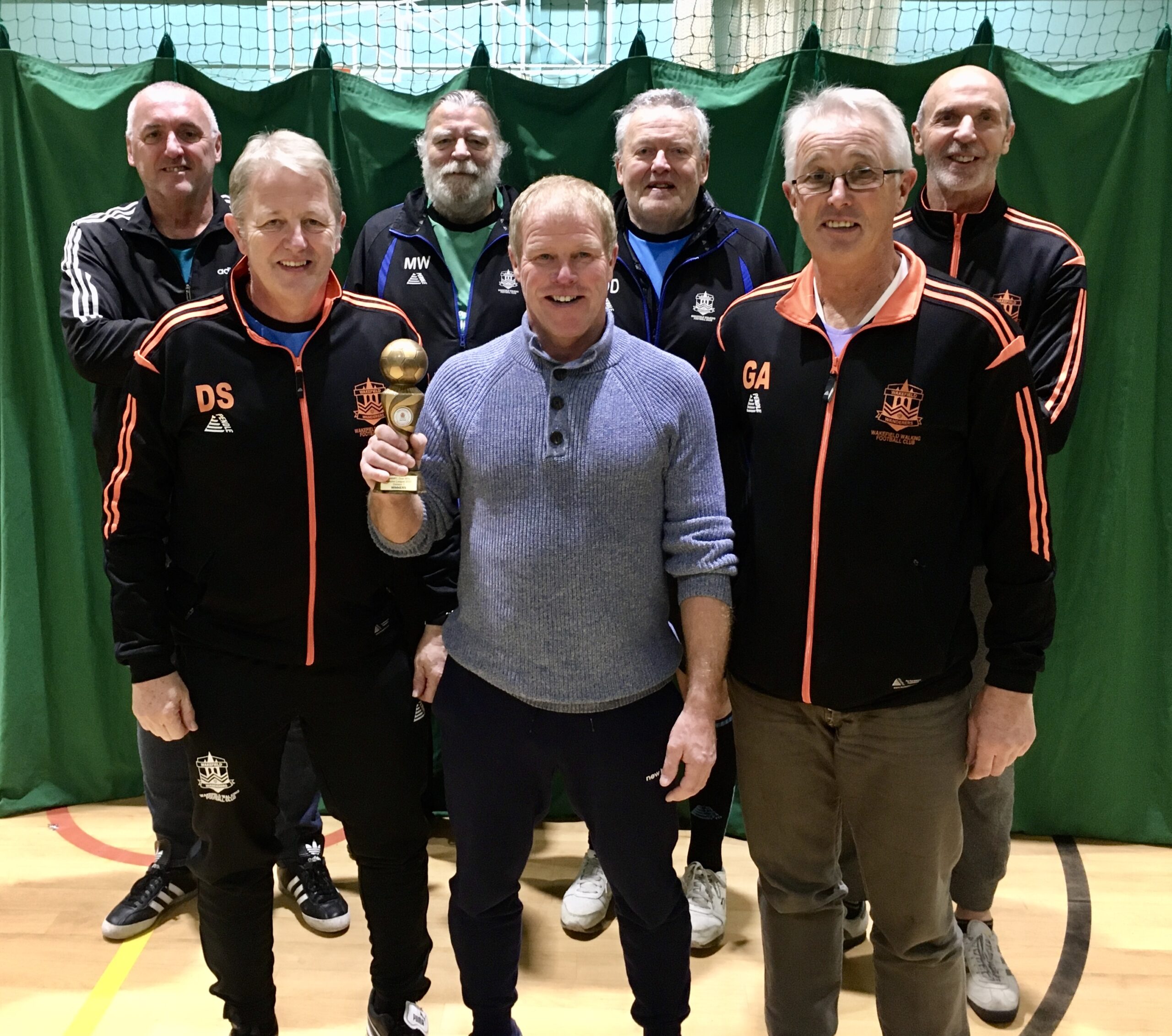 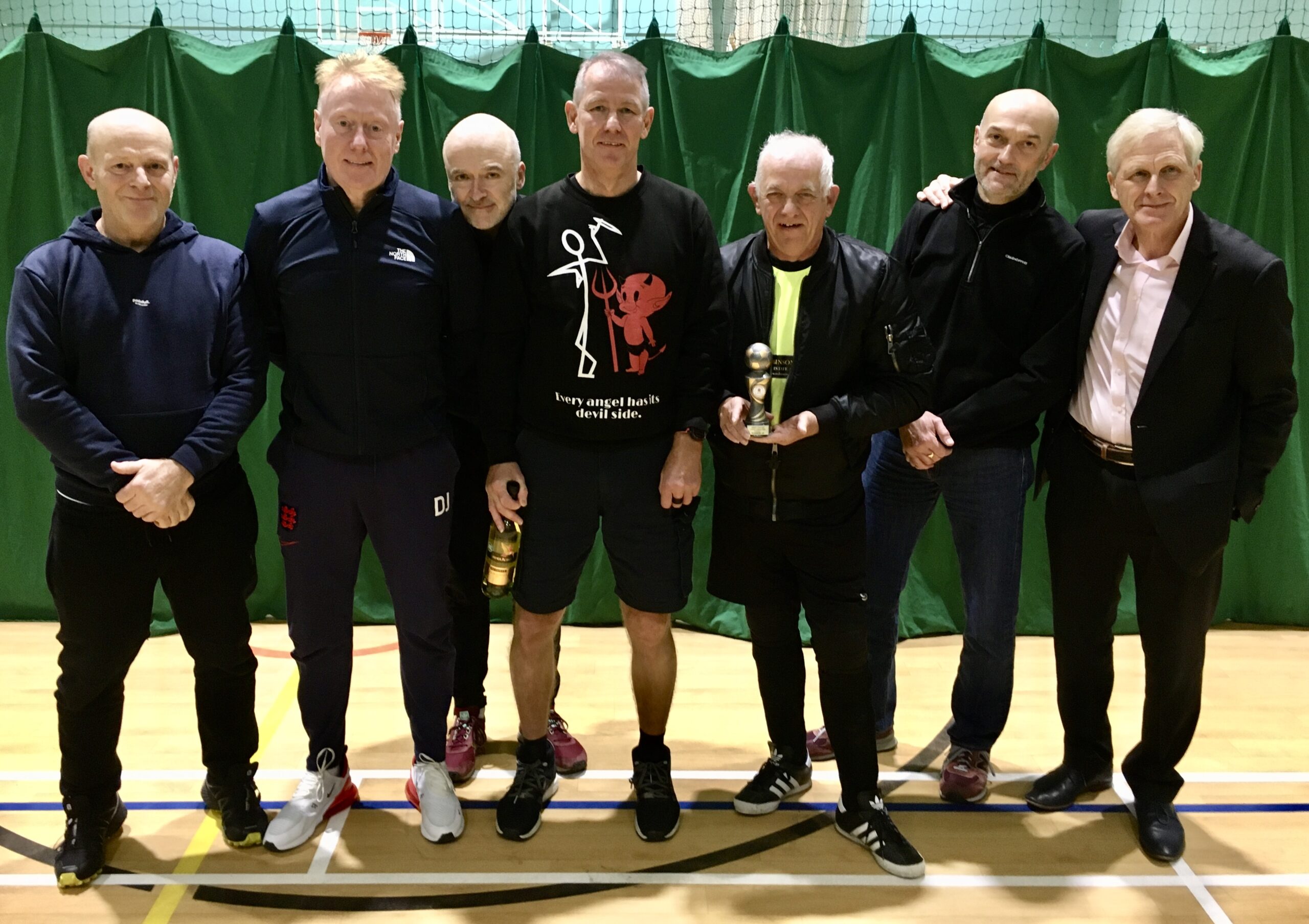 There were fifteen goals scored today in Division 2, with Bolton Wanderers Blues bagging six of them.

As in Divison 1 a similar situation existed at the top in Division 2, with both Bolton Wanderers Blues and Bury Relics Whites level on points with the Bolton side having a two goal advantage. The head to head resulted in a 0-0 draw. Bolton lost their second fixture while the Relics won to take a three point lead.

Their third fixtures saw Bolton win and Bury draw, which meant that the Relics now had a one point advantage with one fixture each to play. The Relics drew with Blackpool FC Senior Seasiders in the 12:20 slot, while Bolton’s final game was at 12:40. Bolton needed a win to seal the top spot.

Unfortunately for the Bolton side they drew with Carlisle SOA, which meant that the Relics had won the division by one point and make a quick return to Division 1 for the 2023 Spring season. The Seasiders finished third, while Carlisle took fourth spot. Preston North End Senior Whites, without a win or a goal today finished at the bottom of the division and are relagated to Division 3 next Spring. 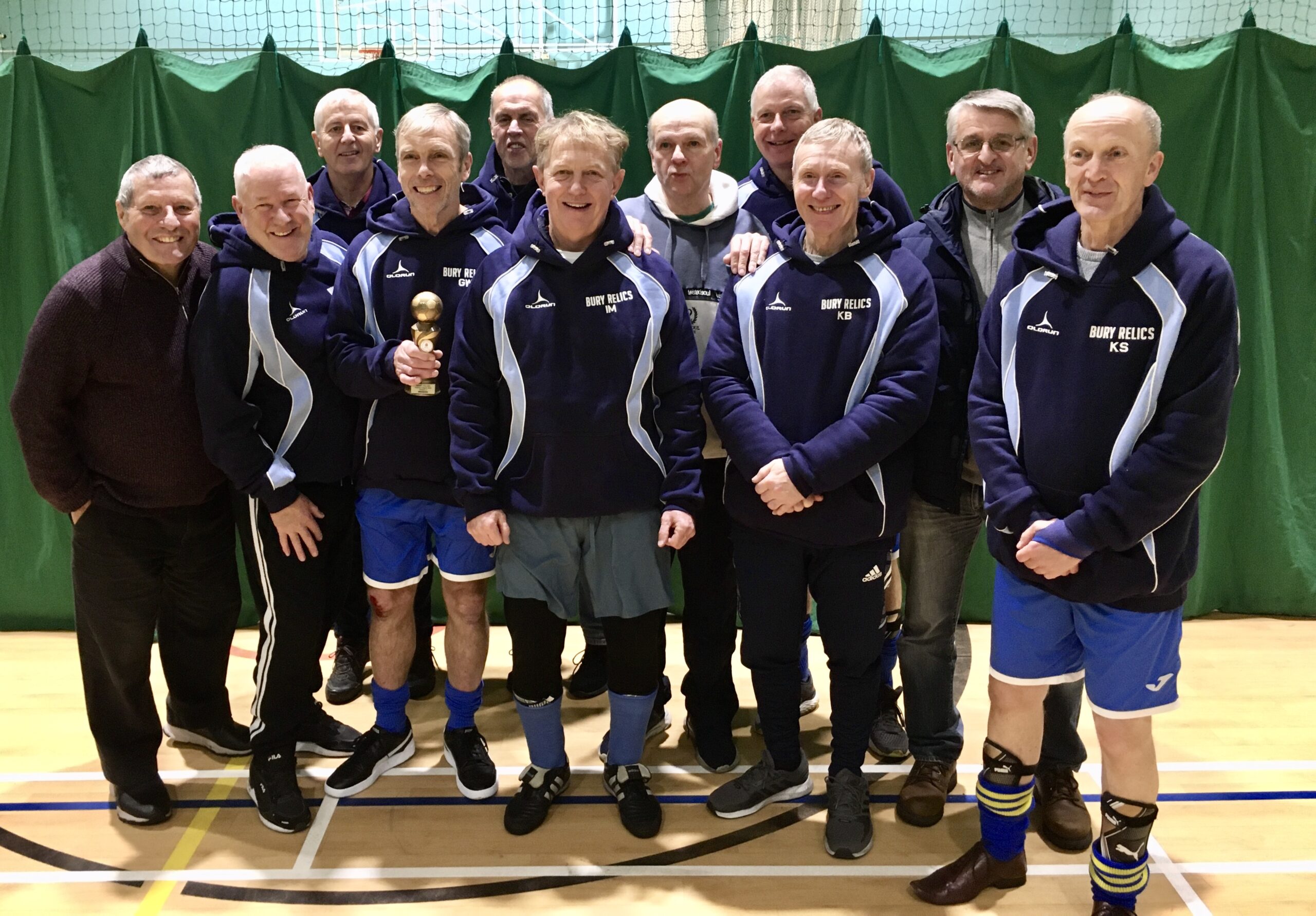 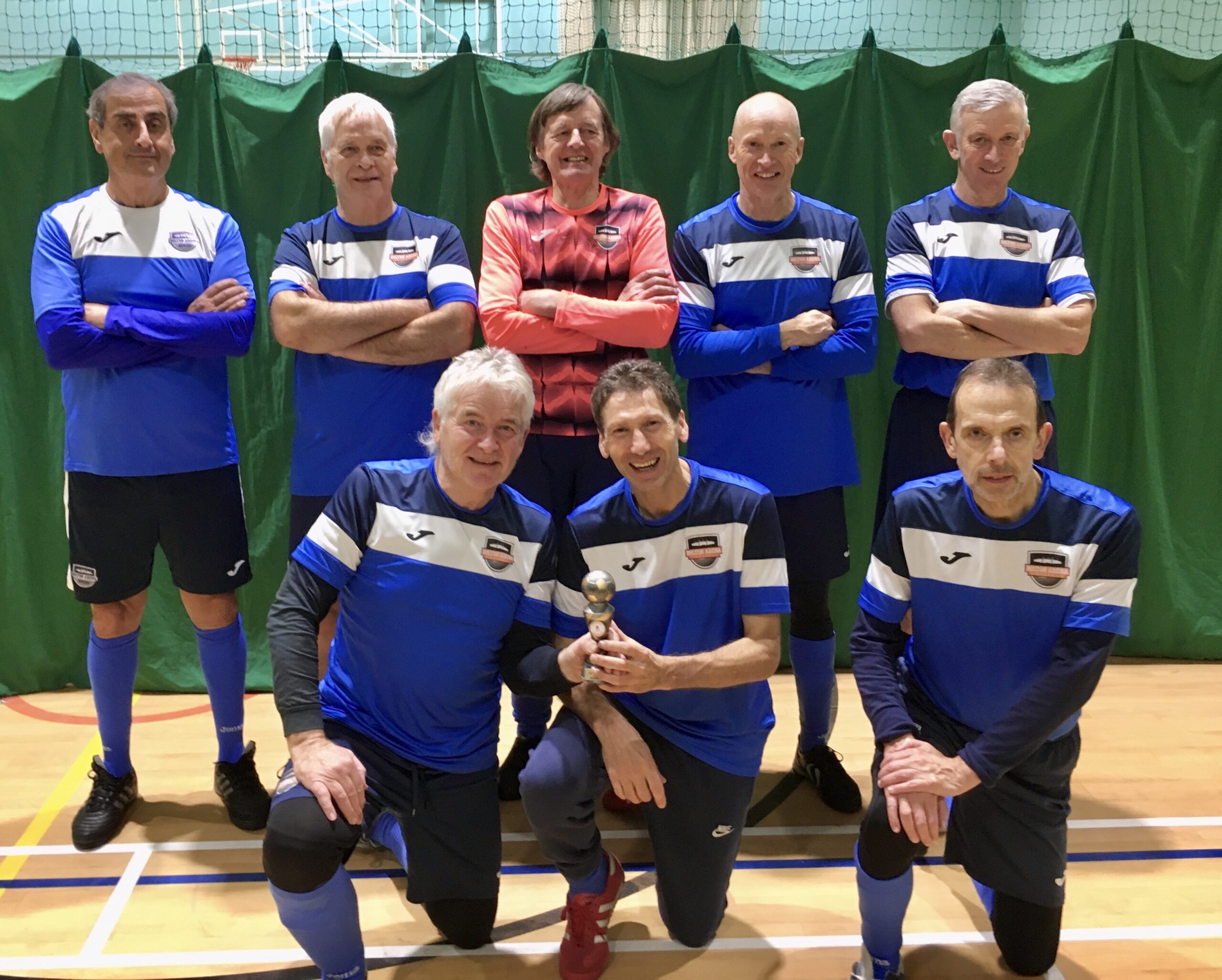 Divisions 3 and 4 were played on 8th December. Twenty three goals were scored in Division 3 today, which must be a record. After the November fixtures it looked to be either leaders by one point, Manchester Corinthians Whites, or Purple Panthers for the Division 3 title. Both teams had first game 2-1 wins while in the 11:20 slot the Panthers went down 1-0 to Garstang WFC. In the only 11:40 slot the Whites had a 5-0 victory which meant a four point lead over the Panthers.

In the 12:00 slot it was the head to head and with only one game remaining after this encounter, the Panthers needed a win. It finished in a goaless draw, which meant that the Whites couldn’t be caught and were the Division 3 Champions. The Panthers were runners up with the much improved Garstang WFC third.

Rochdale Striders took fourth spot and Salcom, without a single point today and shipping fourteen goals, finished fifth and will start in Division 4 in the Spring. 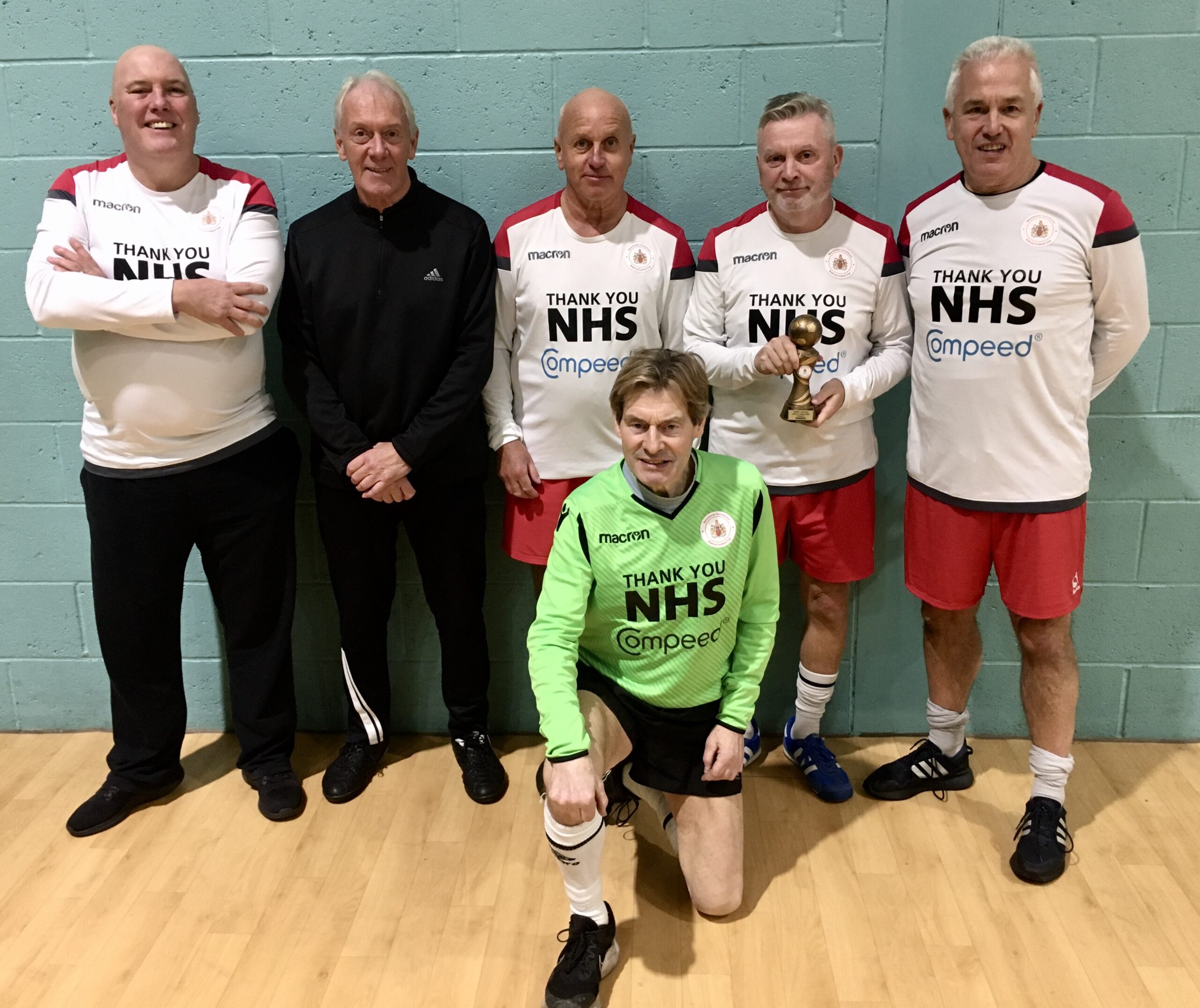 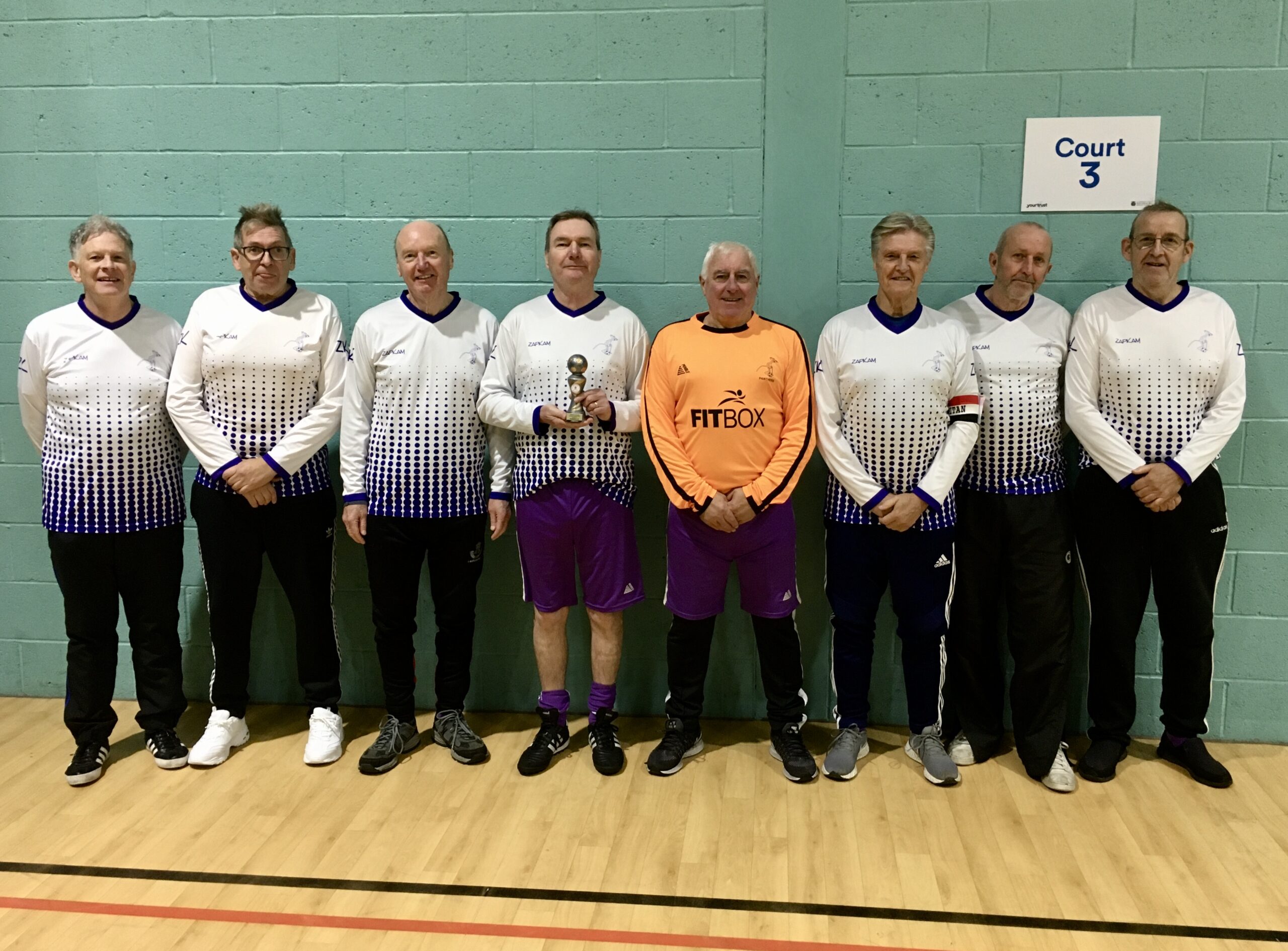 Another excellent goal haul happened in Division 4 today with eighteen goals scored, making it forty one goals in the twenty fixtures in both divisions. Before todays play, Moston Brook FC and Burnley Clarets were both tied at the top on twenty two points with Moston having a better goal difference, so it was all to play for to see who would be Champions.

The Clarets won their first fixture while Moston were defeated. Next was the head to head where the Clarets came out 2-0 winners, giving them a six point lead. One more point from their two remaining games would give then the title. Both the Clarets and Moston won their third games, so the title was secured. Both teams lost their final fixtures to keep the six points difference between them.

The most impressive team of the day was Winstanley Walkers who collected a maximum twelve points and finished runners up. It was case of what might have been with Winstanley overtaking Moston and with just a four point difference between themselves and the Clarets.

Roach Dynamos, bottom placed in November and three points adrift of Maccabi Old Codgers, had a decent day with two wins to overtake the Codgers and secure their place in Division 4. The Codgers, without a point today will be in Division 5 next Spring. The Codgers, always having issues with player availability were original members of the GMWFL and have always been a credit to the league. 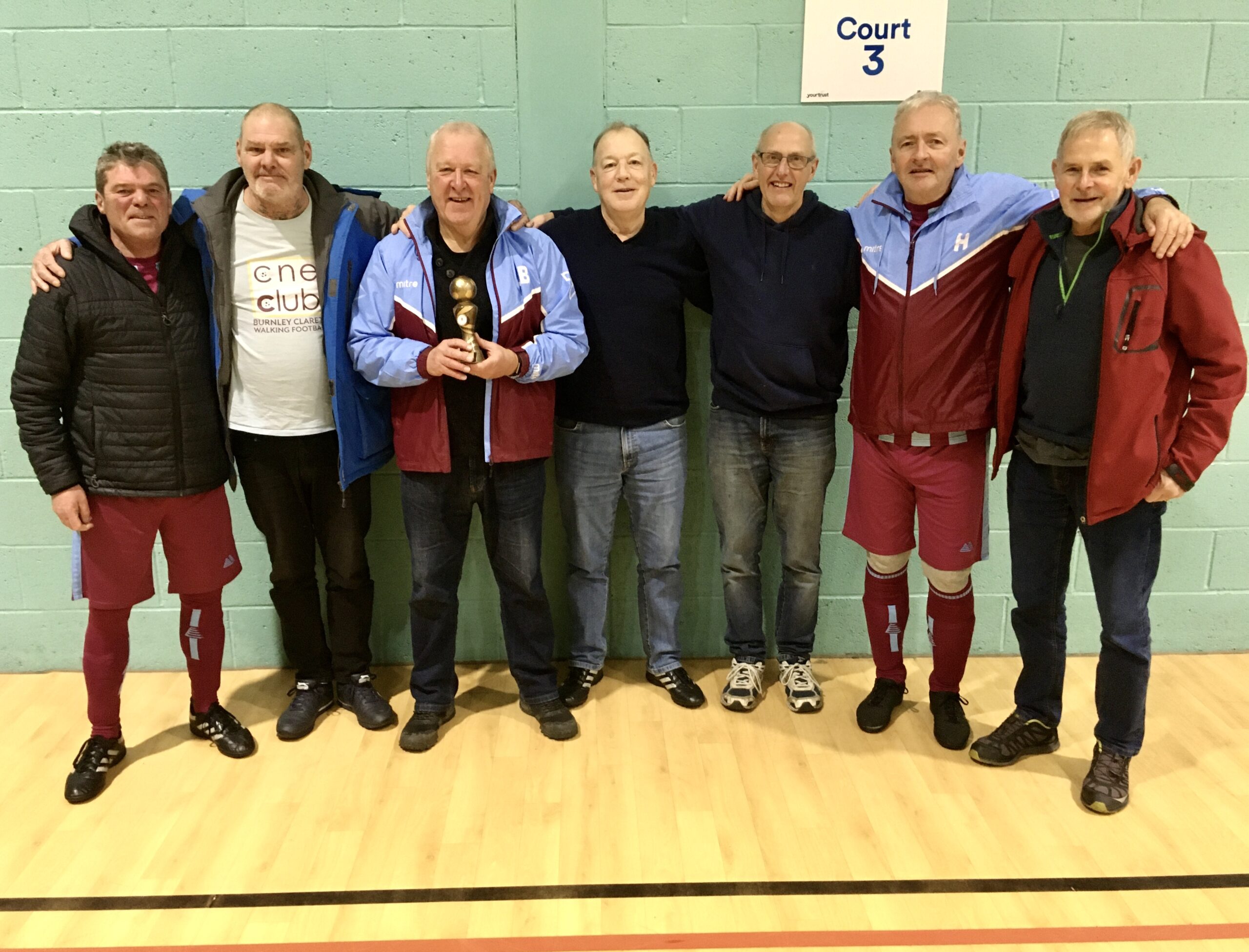 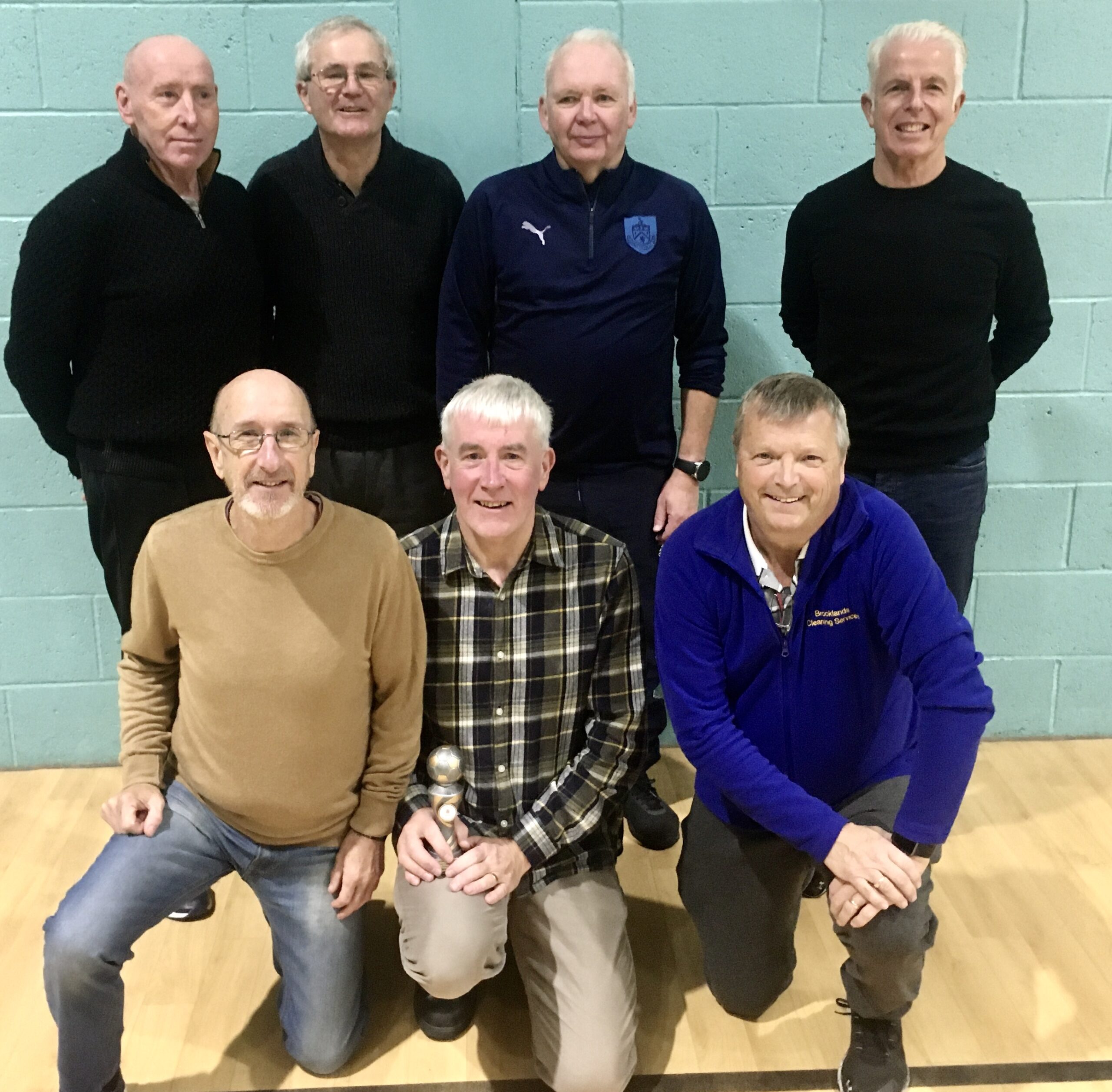 Division 5 was played on 21st December. After all the sub zero temperatures recently the weather warmed up a little and the sun was shining once again. Due to problems on the M62, the Wakefield Wanderers Whites team were stuck in traffic and late arriving. Unfortunately, it meant forfeiting their first fixture against Bury Relics Blues who were awarded a 1-0 win. Thankfully it didn’t effect the division standings.

With one point separating the top two, Bolton Wanderers Whites and Ribble Valley WFC, their first fixture was the head to head. It finished goalless, so it was still all to play for. Both teams completed their fixtures with 1-0 wins, so the top two remained as before the start of todays fixtures, with Bolton Champions and Ribble Valley WFC runners up. Bury Relics Blues, who played well today despite the single win, finished third with Wakefield Wanderers Whites fourth. 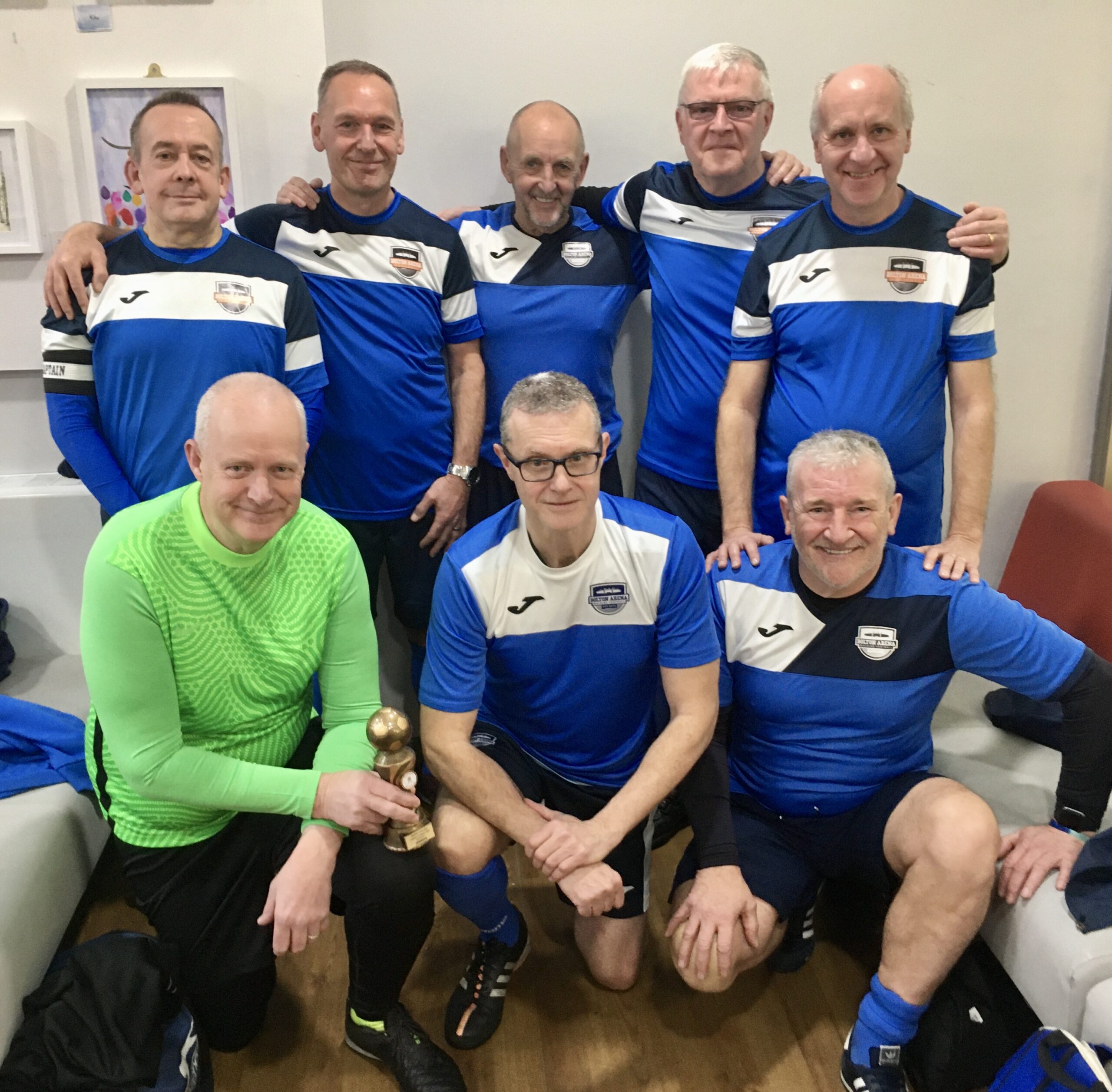 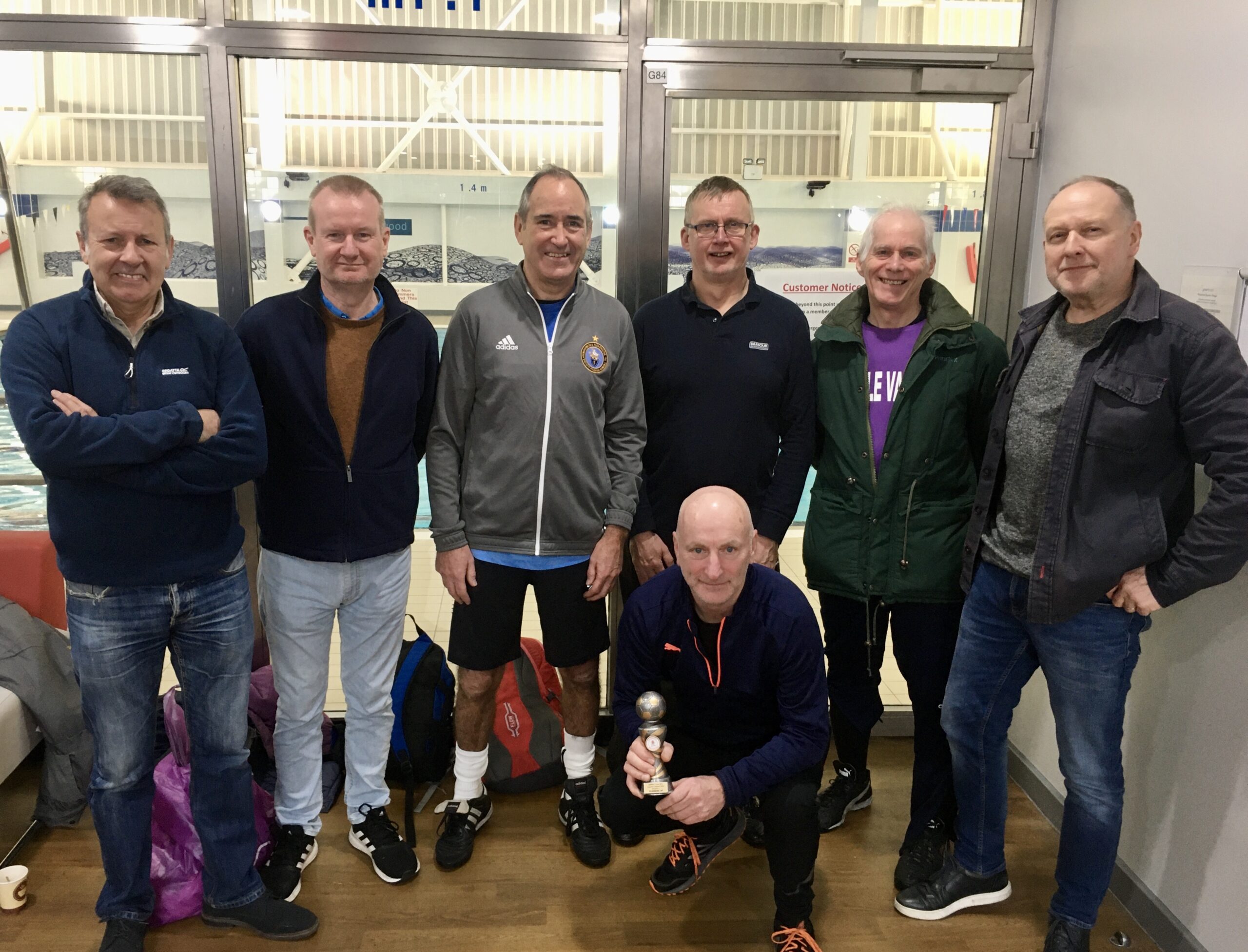 Divisions 1 and 2 fixtures were cancelled on 15th December due to frozen pitches and were played on 12th January 2023. Unfortunately, we had to endure rain and wind but at least all the fixtures were completed. 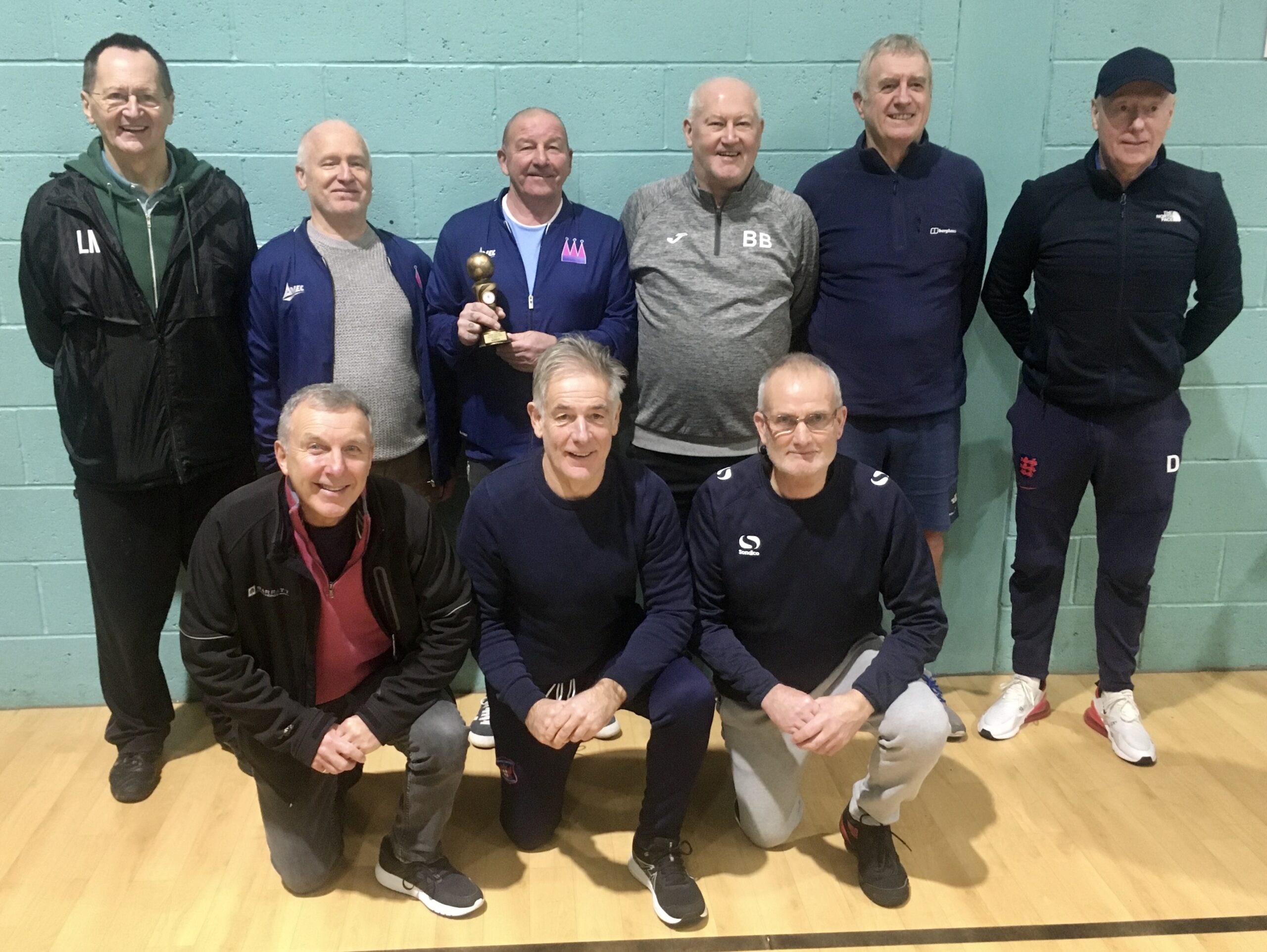 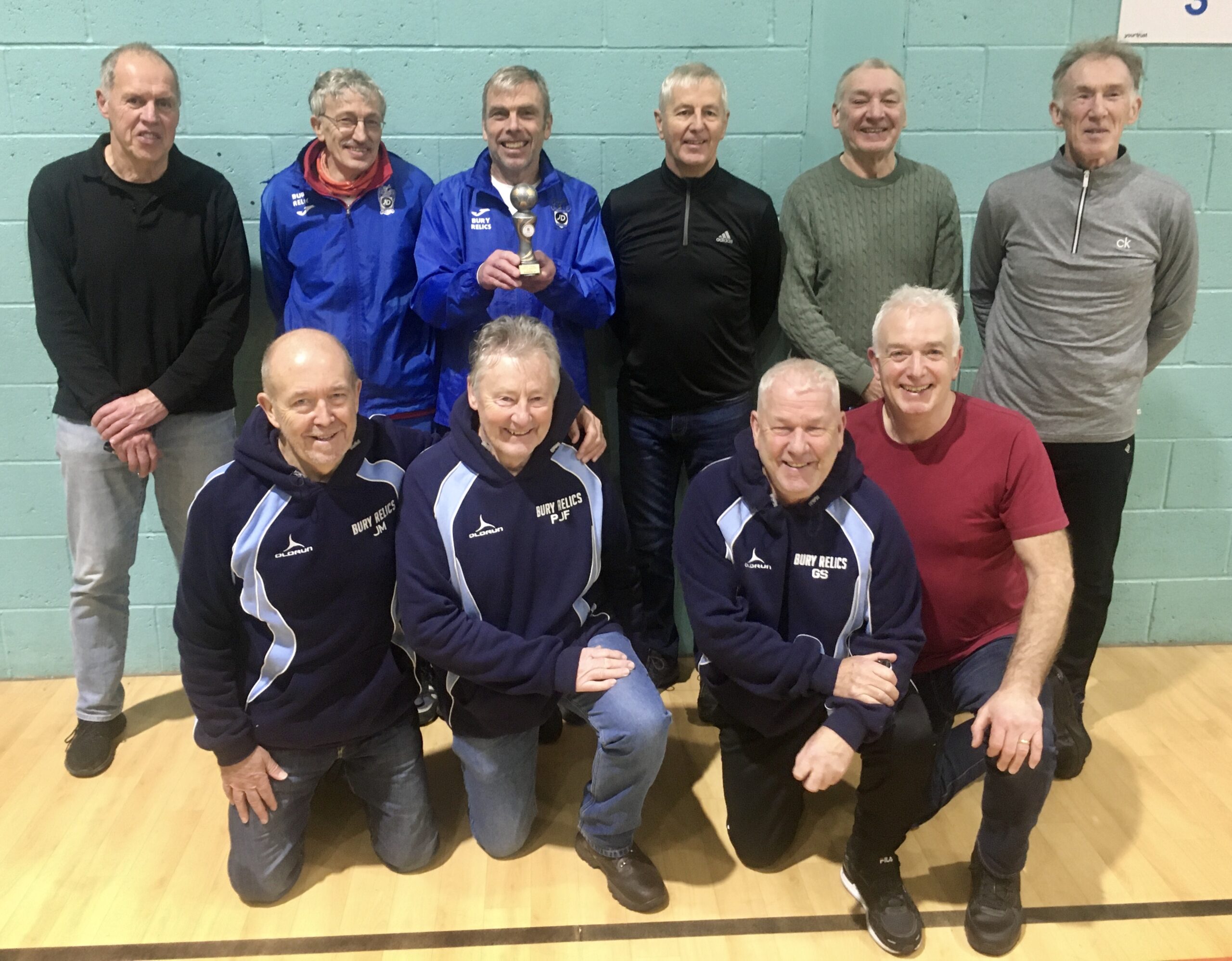 In Division 2, Bolton Arena had a nine point lead going into todays fixtures. It wasn’t a great day for them results wise with only two points collected. However, they still won the division by seven points and are in Division 1 in the Spring 2023 season. It was good to see Ian Thomasson, third left back row in the Bolton Arena photograph, back at Heywood after his successful surgery following a cardiac arrest while playing for our representative team in the Isle of Man recently.

Blackpool FC SS, like Bury Relics in Divison 1, once again were runners up seven points adrift of Bolton Arena and five points ahead of third placed Fleetwood Town Flyers. Salcom were one point behind Fleetwood in fourth place and Purple Panthers were fifth and will play in Division 3 in the Spring 2023 season. 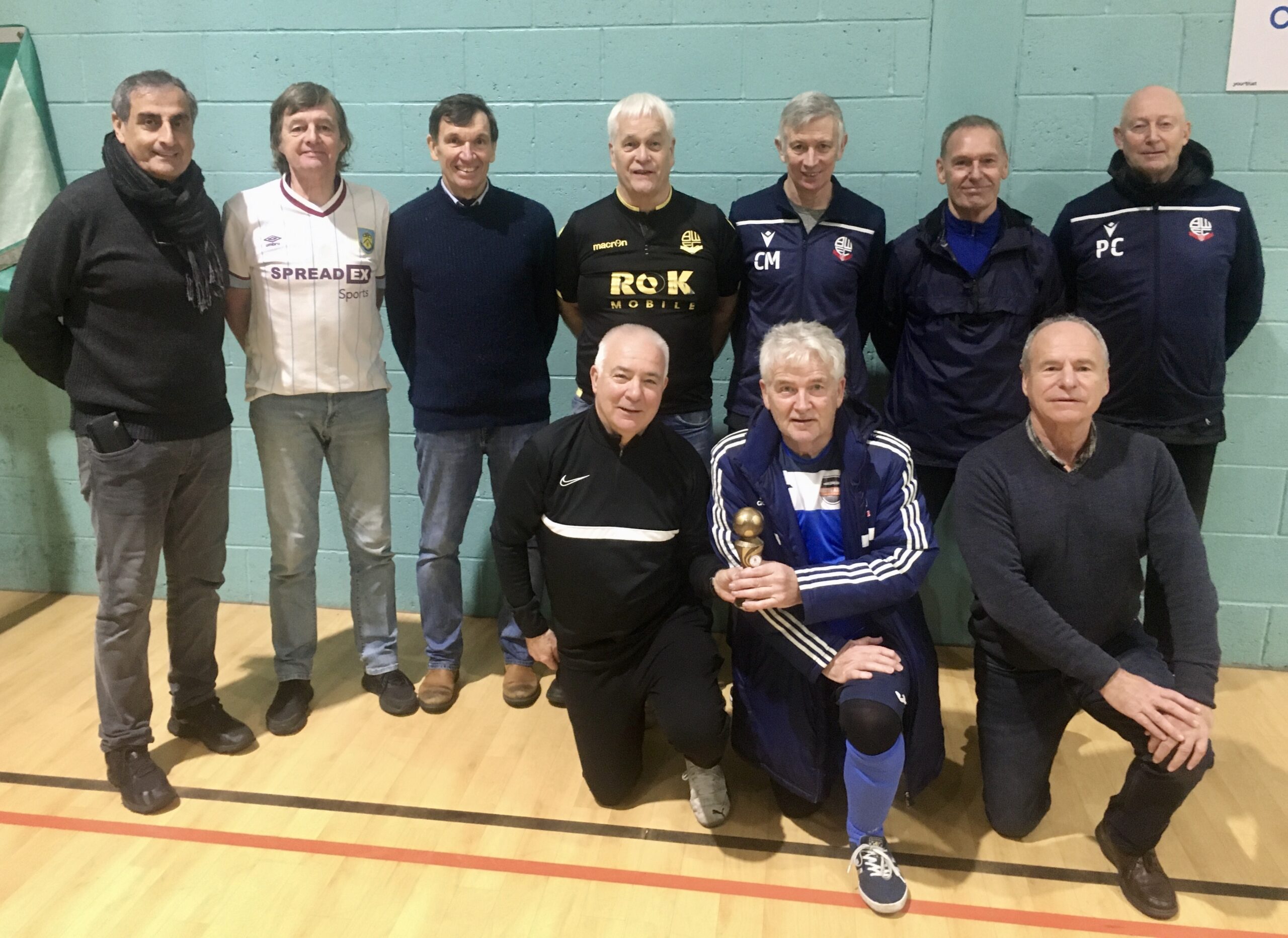 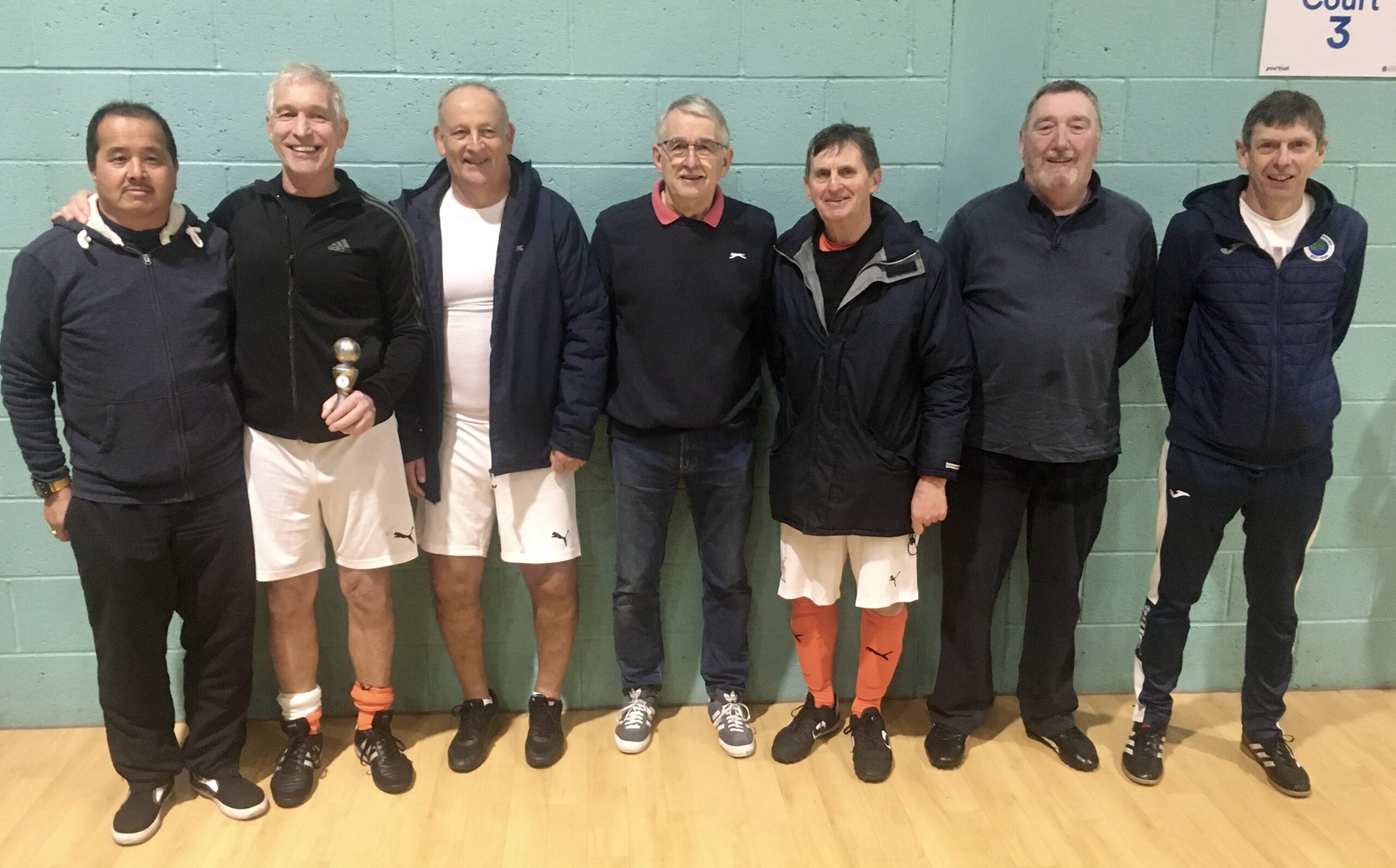 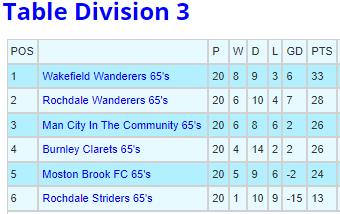 Division 3 was played on 22nd December. Wakefield Wanderers, leading by five points in November over second placed Rochdale Wanderers, maintained that gap by collecting eight points today and are the Champions of Division 5. The Rochdale Wanderers finished runners up, two points ahead of Burnley Clarets and Man City In The Community, who both finished with twenty six points and the same goal difference.

In fifth spot were Moston Brook FC, with Rochdale Striders sixth after only gaining two points today. Well done to Wakefield who gain promotion to Division 2 in next years Spring league. 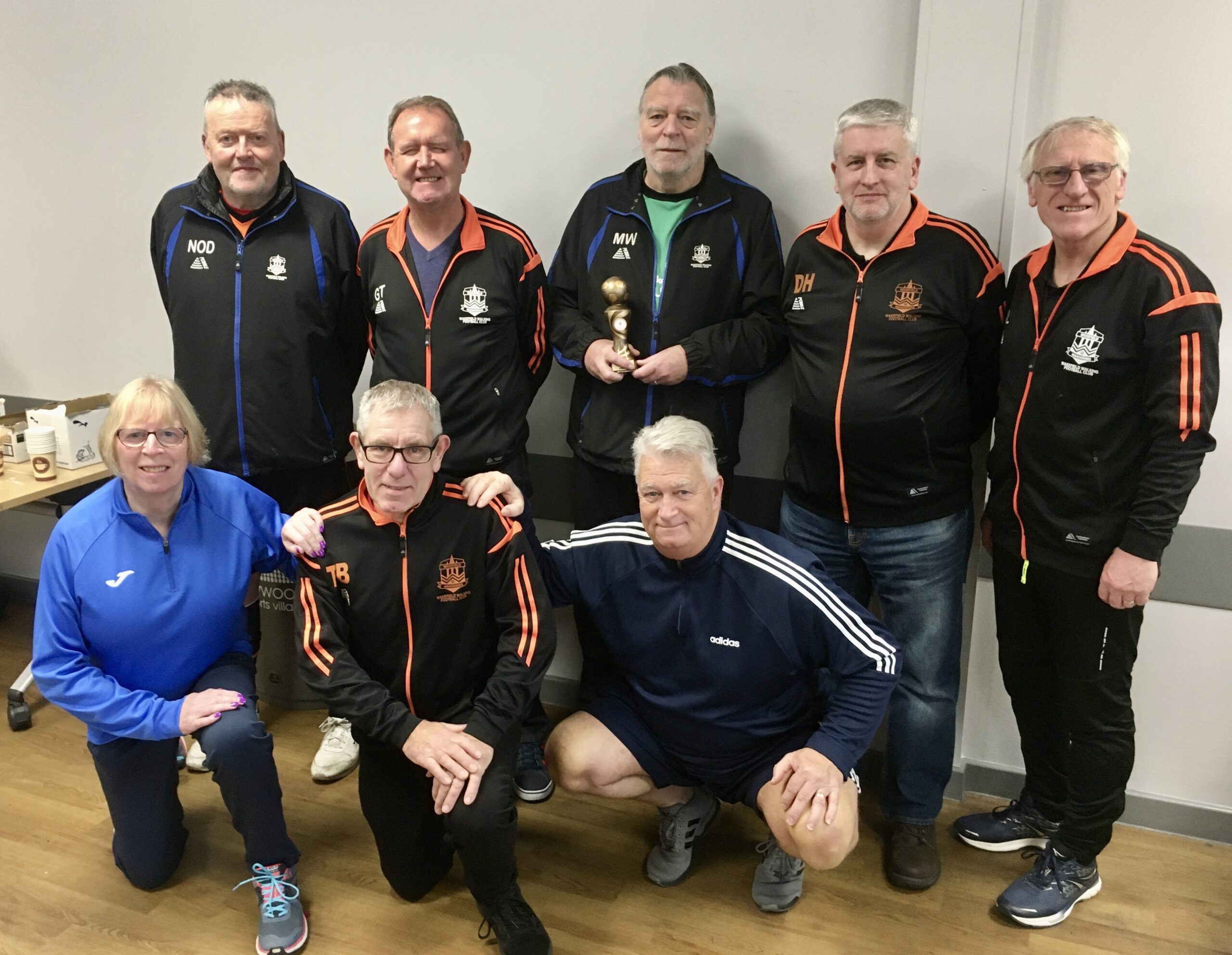 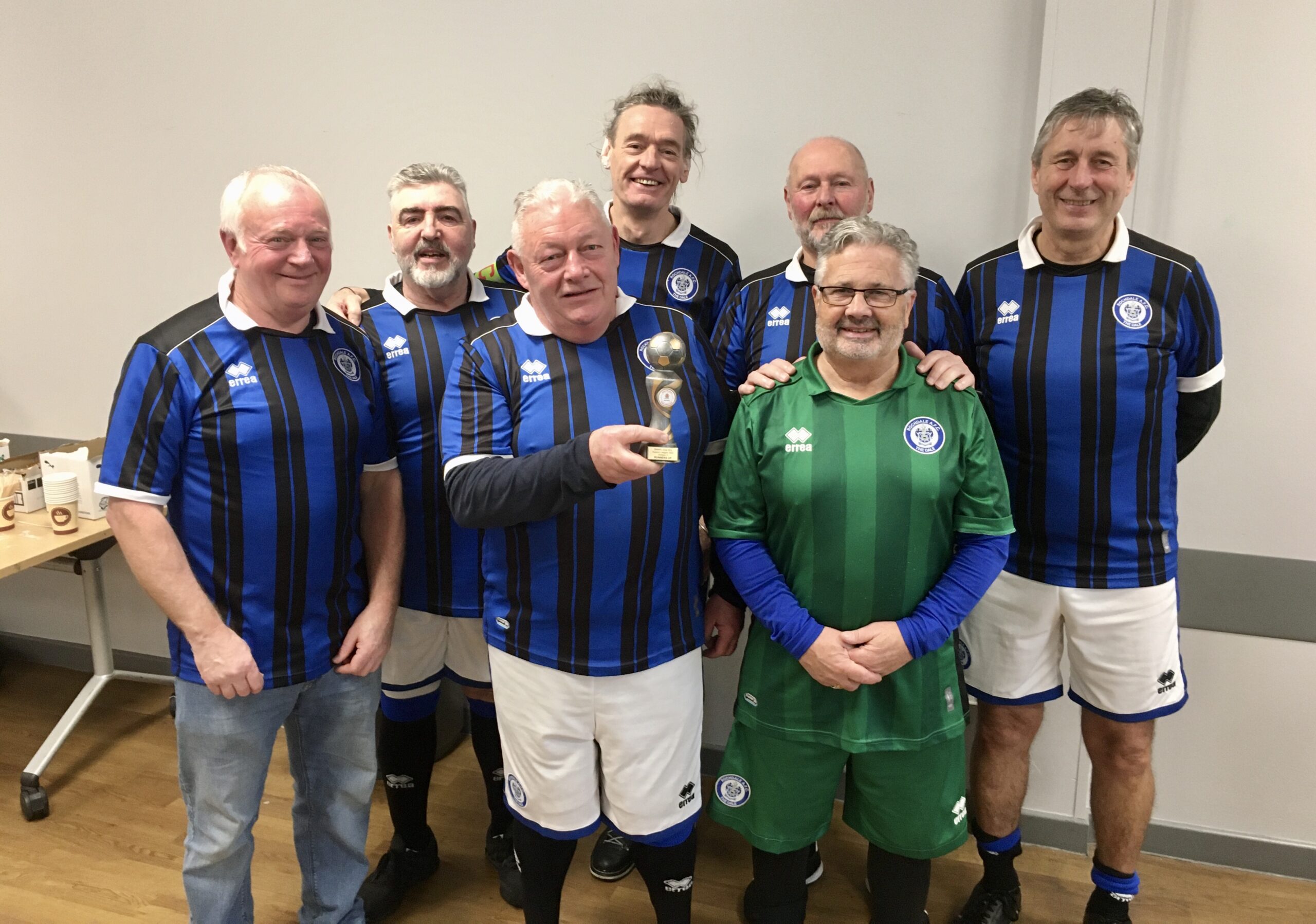 Division 1 was played on 7th December. Both Bury Relics and Rochdale AFC Strollers were level on points with the Relics having a far better goal difference, so the head to head could very well be crucial. Third and fourth placed Blackpool FC Senior Seasiders and Tameside Striders Stripes, although not in the running for the Championship, were separated by only one point and the head to head could decide who dropped down to Division 2 in next years Spring league.

Both the Relics and the Strollers won their first two fixtures, with the Relics adding another goal for to their difference, so in the final head to head fixture the Strollers needed a win. It wasn’t to be as it resulted in a goaless draw, so the Relics retained the Championship for the second season running while the Strollers did the same in the runners up spot.

With both the Blackpool and Tameside teams losing their first two fixtures the Striders needed a won in their head to head as the Seasiders were still a point ahead. The Striders took the lead and it looked as though they would be the team avoiding relegation but due to committing four team offences a penalty was awarded against them which the Seasiders gratefully tucked away.

However, there is hope for the Striders as we have additional teams wishing to join the over 70s league next Spring, which will mean that they will retain their spot in Division 1. 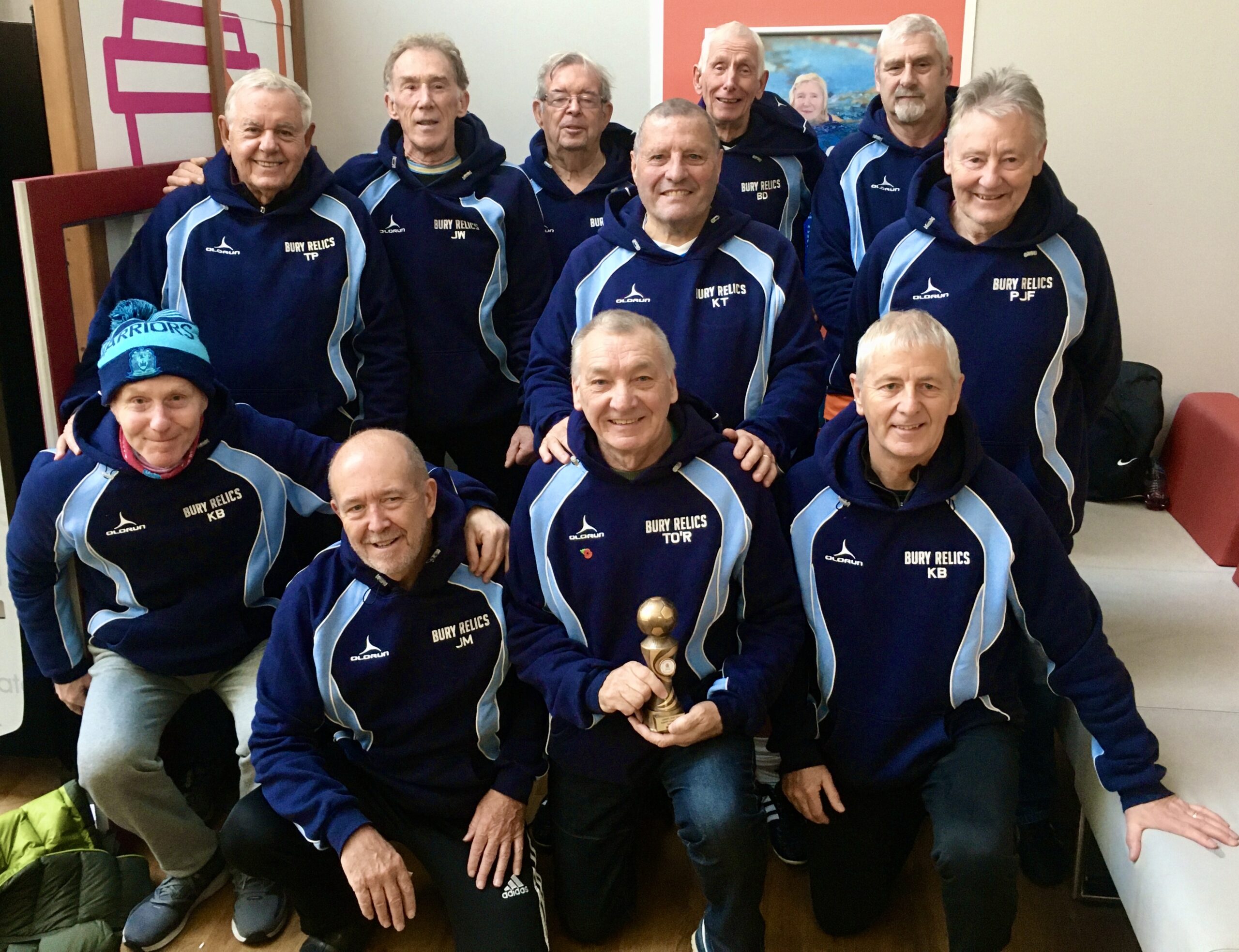 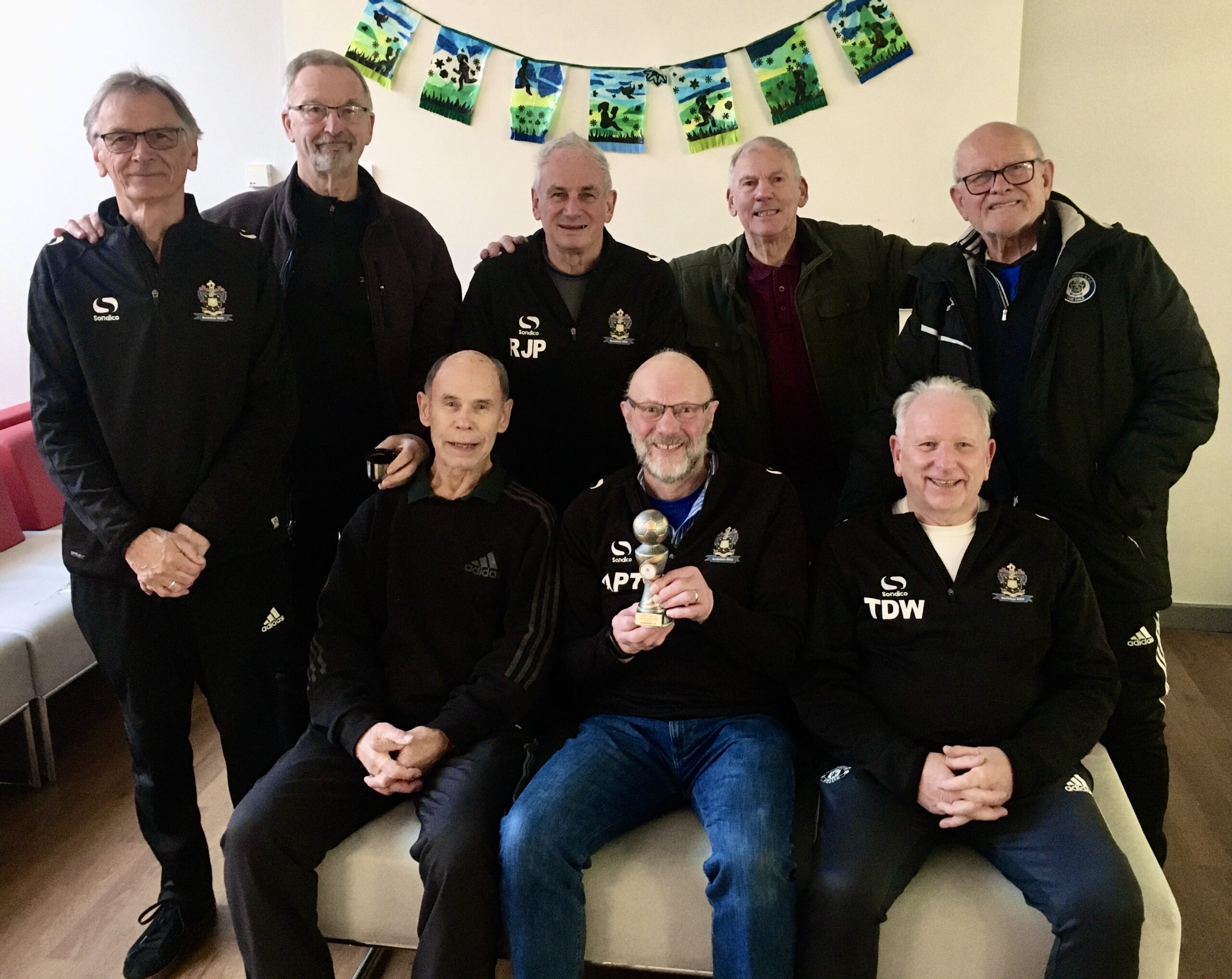 Division 2 was played on 14th December. Fortunately the top pitches were playable despite the freezing conditions. Salcom failed to attend so their opponents today were awarded 1-0 wins. With only three fixtures to play, the game time was extended to thirty minutes, fifteen minutes each way.

The first fixture was between a rejuvinated Man City In The Community and the already crowned champions, Manchester Corinthians. This was an equal affair with both teams having chances and it looked like finishing in a goalless draw. However, City gave away four team offences and Corinthians took the resulting penalty opportunity to give them a 1-0 win.

The second fixture on paper look a draw but Preston North End Senior Whites ran riot scoring four goals without reply against the City side. Three of the goals were scored by Michaela Barlow, a member of the GMWFL over 50s ladies representative team, and what stunning goals they were too.

The final fixture of the day was between the champions and runners up, Manchester Corinthians and Preston North End Senior Whites. It was a good game with both teams cancelling each other out. The Corinthians took the lead and were awarded a penalty, which after being retaken went past the post. The Senior Whites equalised to give them a well deserved draw. 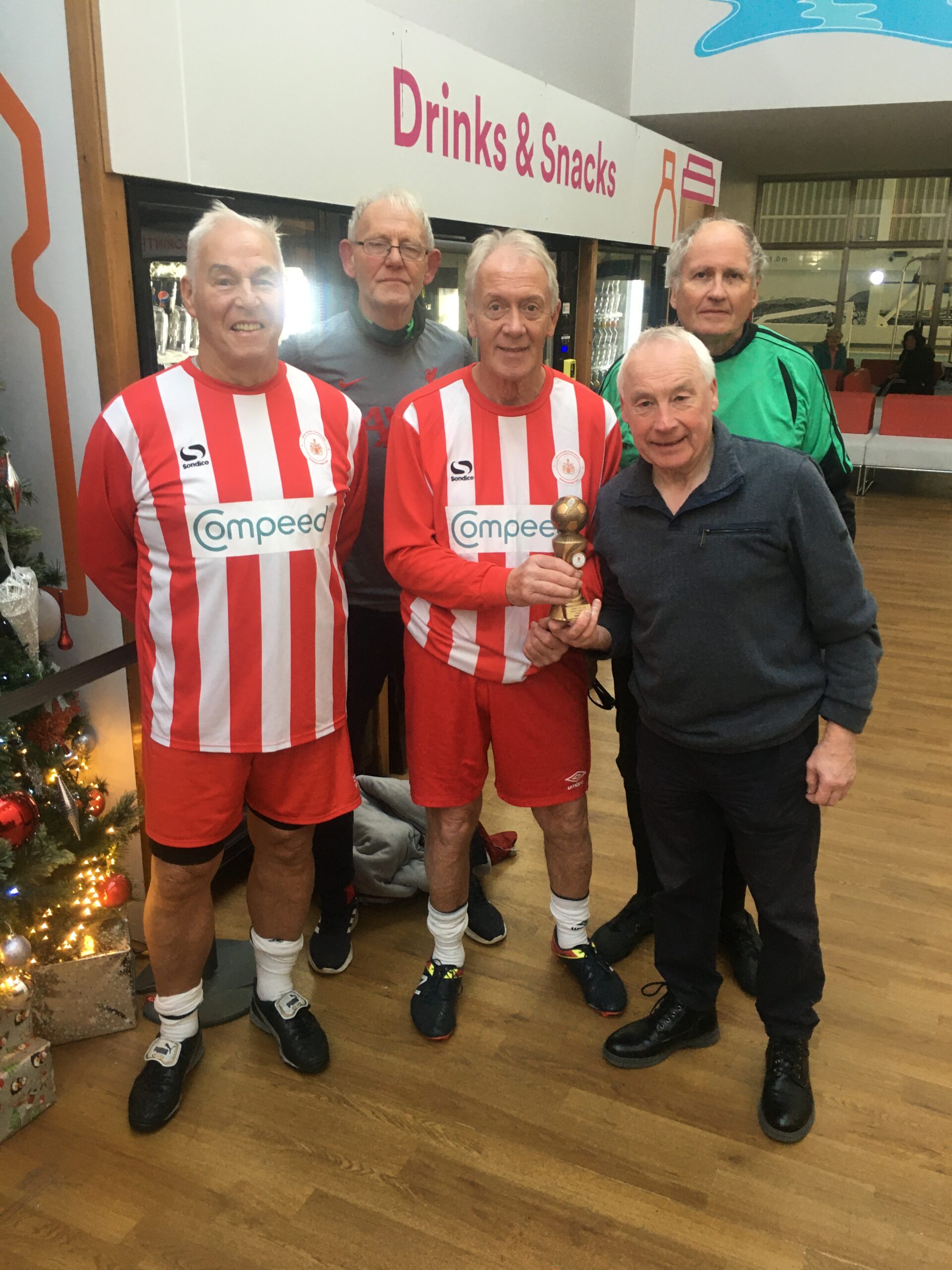 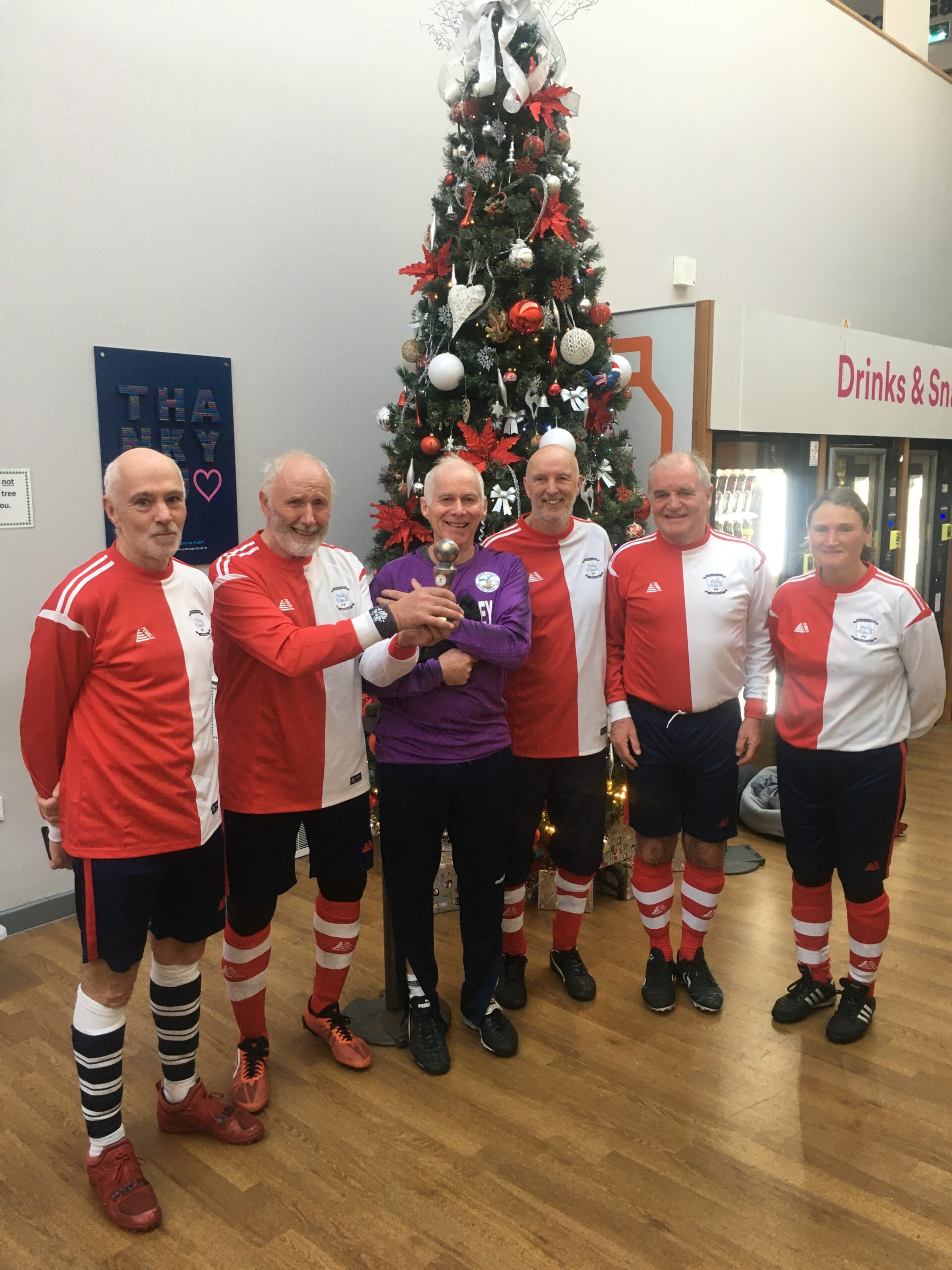 Due to the Christmas holidays the final session of Division 3 was played on 30th November. It could have been any one of three teams to take the title, with just one point separating them.

The second round of fixtures saw no change in the standings with all teams drawing 0-0. The final round made the outcome of the game between Bolton Arena Cardinals and Tameside Striders Stripes the decider for the title of Champions.

This looked likely to be a scoreless draw but with only a few minutes left to play, the Cardinals grabbed a goal. Another one soon followed which meant that they were Champions and will play in Division 2 in next years Spring season. The Stripes finished runners up with the Greens third and Moston fourth. 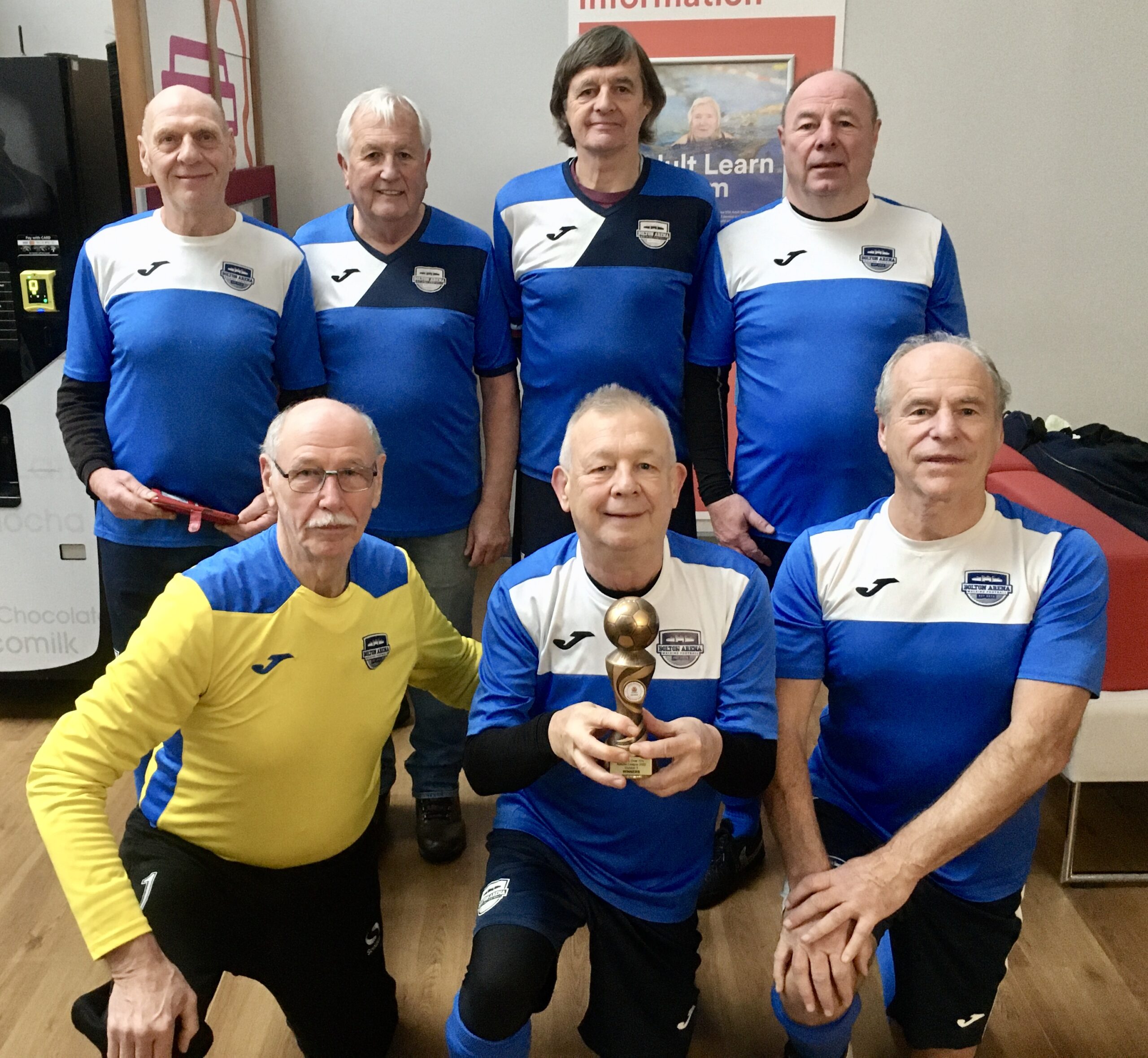 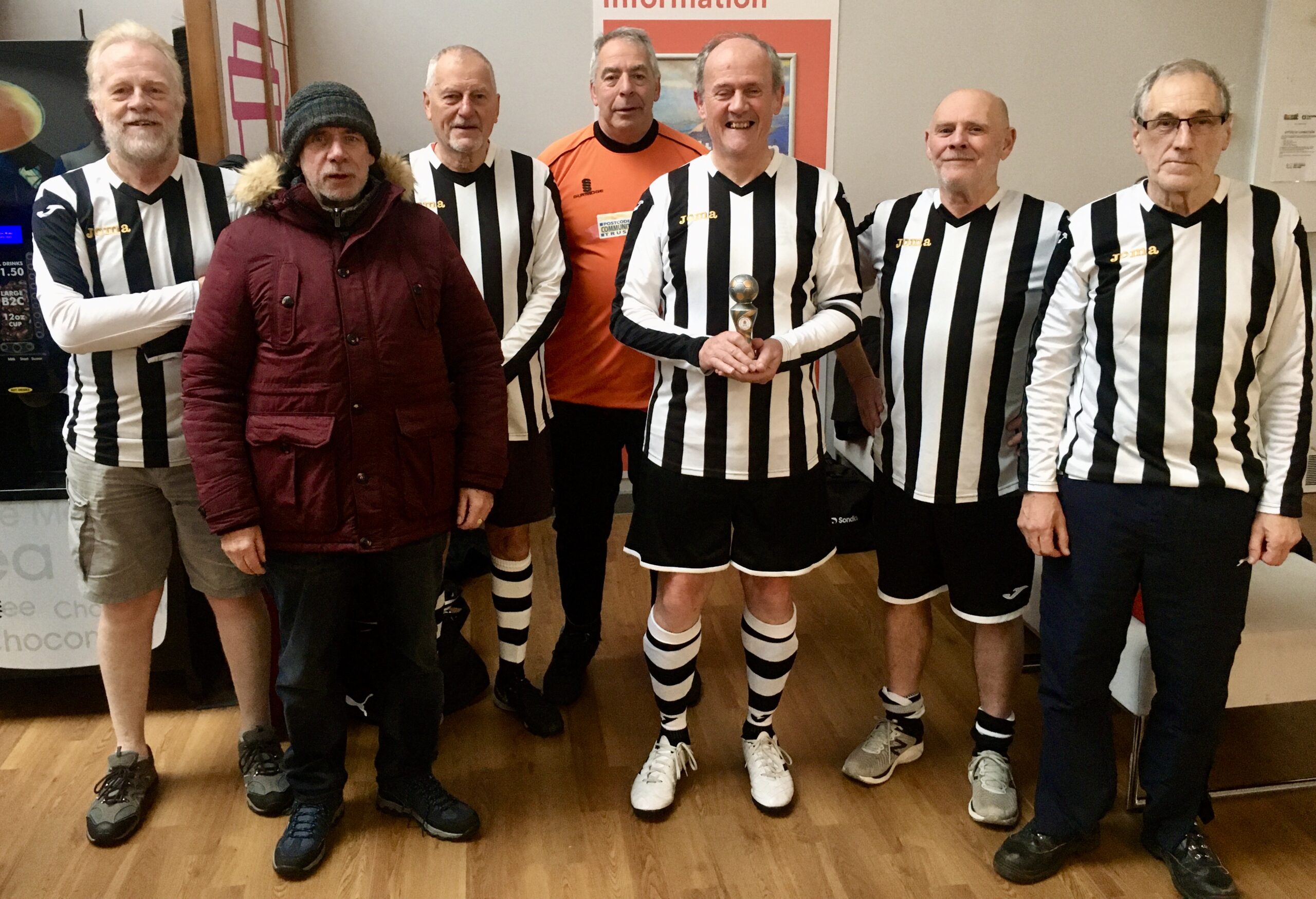