Manchester Walking Football November 2021 on 4th November saw the third the session of the Autumn league. Divisions 1 & 2 of the over 60s took part on this day.

Bury Relics overtake Bolton Wanderers Walkers to take fourth spot, they drew three and lost one. The Wanderers managed one point with one draw and three losses.

As in Division 1, in Division 2 the top three places remain the same. Club Kingsmaid remain top of the table, adding ten points with three wins and one draw. Blackpool FC Senior Seasiders, are in second spot nine points behind Kingsmaid with one win, one draw and two losses.

Fleetwood Town Flyers are now level on points with the Seasiders with two wins and two draws, a goal difference of five separating the two teams. Purple Panthers WFC remain in fourth spot by a goal difference of two over Manchester Corinthians Whites. The Panthers only picked up one point with one draw and three losses while the Whites gained four points with one win, one draw and two losses.

On Armistice Day, the 11th, two minutes silence was impeccably observed by all who attended.

In Division 3 Rochdale Striders are still top but their two point lead over Preston North End Senior Whites has been wiped out with both teams now on twenty points and the same goal difference. The Striders picked up five points with a win and two draws, while the Whites gained seven points from two wins and a draw. The December head to head could very well decide who will be the Champions of Division 3.

The four point gap between third placed Maccabi Old Codgers and fourth placed Salcom has increased to eight points. Maccabi had a win, a draw and a loss while Salcom lost all three fixtures and look doomed for relegation in next years Spring season.

Top of Division 4 from the start of the Autumn season, Moston Brook FC, remain there with a one point lead over Carlisle SOA. Both teams had two wins and a draw. Carlisle were the days highest scorers with seven goals and if only they hadn’t been affected by a Covid outbreak in September would arguably be top by a good few points. As in Division 3, Division 4 could very well be decided in the December head to head by these two teams.

18th November saw the third session of the 65s Autumn league. Bury Relics October four point lead and two goal difference advantage was wiped out with one win and three draws, while Manchester Corinthians replaced them at the top with three wins and one draw giving them ten points on the day. The Corinthians now top the table with a goal difference of one. Rochdale AFC Strollers are still in contention lying in third spot, three points behind the Corinthians and the Relics. The Strollers won two, drew one and lost one.

In fourth spot are Manchester Senior Citizens who drew two and lost two. Salcom looked an improved team despite only drawing one and losing three but still look certainties for relegation. This is a very strong division and it will be interesting to see who prevails in the final session in December.

All the positions in Division 2 remain the same as last month but Preston North End Senior Whites lead at the top has been cut from four points to two points after winning one and drawing three. In second spot, Blackpool Senior Seasiders won two and drew two. Fleetwood Town Flyers won one and drew three and are now three points adrift of the Seasiders.

Purple Panthers, three points ahead of Rochdale Striders in October, increased that to five points with three draws and one loss. The Striders could only pick up a single point from one draw and three losses and only a miracle will save them from relegation to Division 3 in next years Spring season. 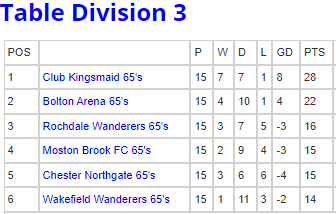 Division 3 of the over 65s was played on 25th November. Club Kingsmaid, three points adrift of Bolton Arena in October, had a good day with four wins and one draw to overtake Bolton and give them a six point advantage. The Arena team could only manage four 0-0 draws and the one loss.

Rochdale Wanderers jumped from fourth place to third and added five points to their October eleven with one win, two draws and two losses. Moston Brook FC lying in bottom spot after the October session are now in fourth position after two wins, two draws and the one loss.

Chester Northgate drop from third spot to fifth spot after only adding three points to their previous twelve with three 0-0 draws and two losses. Wakefield Wanderers lie in bottom position after picking up just four points with four 0-0 draws and one loss.

Club Kingsmaid look to be the likely champions of Division 3 going into the final December fixtures. They play an excellent passing game with players always available in space.

The over 70s was also played on 25th November. Rochdale AFC Strollers have already won Division 1 of the over 70s, their eleven point lead over Bury Relics gives them the title with three games to spare. The Strollers won two and drew one and to date have only dropped four points.

The Relics, a strong team without doubt, won one drew one and lost one and have a three point lead over Preston North End Senior Whites for the runners up position. The Senior Whites won one and lost two. Blackpool Senior Seasiders remain in bottom spot, two points behind Preston after one win and two defeats.

In Division 2 Manchester Senior Citizens tying on points with Tameside Striders but a better goal difference after the October session, now have a two point lead over the Striders with two wins and the one draw. The Striders had one win and two draws and with an eight point advantage over third placed Salcom are virtually guaranteed second spot and the head to head with the Citizens in December could decide which team are crowned champions of Division 2.

Salcom added four points to their previous six and have a nine point advantage over bottom placed Moston Brook FC. Salcom won one, drew one and lost one while Moston suffered three defeats.

The full results and tables for all the November sessions are on the website drop down menu for each age category.