Divisions 1 and 2 were played on the 3rd of the month. The battle for top spot in Division 1 continues with September and October leaders, Wakefield Wanderers, dropping to second spot on goal difference to Club Kingsmaid.

Although losing to Wakefield, Kingsmaid picked up nine points while Wakefield picked up eight points. The December head to head could prove interesting. Manchester Corinthians Reds remain in third spot, a position they have maintained all season. Five points were gained today, unfortunately not sufficient to challenge for the top spot.

Rochdale Strollers are fourth, six points adrift of the Corinthians, the Strollers having an eight point lead over bottom placed Fleetwood Town Flyers. Both teams picked up two points today, a statistic that belies their football abilities.

Teams in this division are so strong that any of them would win most competitions. The standard of teams in walking football is now far superior to what it was a few years ago. No one team dominates for any length of time any longer.

In Division 2 Bolton Wanderers Blues, whose lead over Bury Relics was three points in September and two points in October, has been reduced to a goal difference of two goals. They drew in todays head to head and the December outcome could well be decided in the same way. The Wanderers grabbed six points while the Relics grabbed eight points.

The seasiders gained six points today, while Carlisle gained four and the Senior Whites two points. Only three points have separated these three teams all season.

Divisions 3 and 4 were played on 10th November. There was only one point separating all five teams last month in this division. Leaders, Manchester Corinthians Whites, stay one point ahead at the top grabbing eight points today. Third placed Purple Panthers move into second spot, one point behind the Corinthians after also picking up eight points.

Garstang WFC are in third position four points behind the Panthers. On the same points in fourth spot are Rochdale Striders but with an inferior goal difference to Garstang, both teams picking up four points. Salcom, second placed in October only picked up one point today and are now bottom of the table. It looks like a December head to head between the Corinthians and the Panthers could decide who takes the title.

A similar situation exists at the top of division 4, with both Moston Brook FC and Burnley Clarets on the same points, although Moston have the superior goal difference. Leading by a goal difference of two in October, Moston have increased that to three goals, both teams grabbing eight points today. Once again the December head to head could very well decide which team become the Division 4 Champions.

Division 5 was played on 16th November. Bolton Wanderers Whites, a point behind Ribble Valley WFC in October, go one point ahead picking up seven points to now second placed Ribble who managed to collect five points. It’s between these two sides to see who the Champions of Division 5 will be in December.

Bury Relics Blues are in third spot, adding four points to their October four and moving off botton spot, with a two point advantage over Wakefield Wanderers Whites who lost all three of their fixtures and are now bottom of the division table.

Divisions 1 and 2 were played on 17th November. In Division 1 Club Kingsmaid have already took the title with four wins and one session to play. Bury Relics are in second spot and look to be the runners up in December as they were in the Spring league. Last years champions Manchester Corinthians Reds move up one place after collecting seven points.

Preston North End Senior Whites drop one place adding two points to their October eight. Forner Champions Rochdale AFC Strollers find themselves bottom of the table after collecting just one point today and must be favourites for relegation to Division 2 in next years Spring league.

Bolton Arena increased their lead at the top of Division 2 from two points to nine points over Blackpool FC Senior Seasiders. Barring a disaster Bolton should be promoted to Division 1 next Spring. They had a ten point haul today while the Seasiders gained only three.

Third spot goes to Fleetwood Town Flyers, who move off bottom spot with seven points gained today. Salcom in fourth place gained five points, while Purple Panthers had a bad day collecting just the one point and drop from third to fifth. 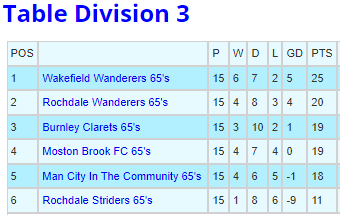 Division 3 was be played on 24th November. Wakefield Wanderers remain in top spot with a five point lead over Rochdale Wanderers and look to be champions of this division but stranger things have happened in football. The Yorkshire side added seven points to their October eighteen.

Any one team from four could challenge for the likely runners up spot. Rochdale Wanderers are on twenty points, while both Burnley Clarets and Moston Brook FC are on nineteen points, with Man City In The Community on eighteen points. The Wanderers and Man City both had the best haul of points today with eight each. The Clarets added six while Moston added five.

In bottom spot are Rochdale Striders who added four points to their October seven and are seven points adrift of Man City.

Division 1 was played on 2nd November. Bury Relics remain top of the table, although their October three point lead over Rochdale AFC Strollers has been reduced to a goal difference of seven goals, which makes them slight favourites to retain their Spring league title win. It could of course be settled in the December head to head.

The Blues led the table in September but since then have only added one point to their total, losing all three fixtures today.

Division 2 was played on 9th November. Leading in October by eight points, Manchester Corinthians now have an eleven point advantage and are the Division 2 Champions with one session to play. Still unbeaten in this Autumn league they grabbed another seven points today.

Moving into second spot are Preston North End Senior Whites, picking up five points today. Salcom, second in October drop to third spot after gaining three points from their three fixtures. Looking a vastley improved side today, as strange as football can be, Man City In The Community could only add another one point to their current one point and are nine points adrift of Salcom. They also have a massively inferior goal difference and barring a miracle will be relegated for next years Spring season.

Tameside striders Stripes lie third, one point behind the top two and it would seem that these three teams will be fighting it out in the next session to decide who is promoted to Division 2. Moston Brook FC are three points behind the Stripes in bottom spot but anything could happen in the final round.

Due to the Christmas holidays the final session of Division 3 will be played on 30th November.