Divisions 1 & 2 were played on the 6th of the month. All places stayed the same in Division 1. Wakefield Wanderers remain in top spot but Club Kingsmaid, in second position, reduced Wakefields advantage to just one point from Septembers two.

Club Kingsmaid now have a three point advantage over third placed Manchester Corinthians Reds, who in turn also increased their advantage over fourth placed Rochdale AFC Strollers to three points. Fleetwood Town Flyers remain in bottom spot on just one point. Some may assume that the Flyers are a weak team. Far from it, they are a good side in a division packed with quality teams, who would hold their own against most teams in the country.

The top two places in Division 2 remain the same although Bolton Wanderers Blues have their three point lead over Bury Relics reduced to two points. Blackpool FC Senior Seasiders move up to third spot adding six points to their September three. Preston North End Senior Whites move up from bottom spot now on eight points, one adrift of the Seasiders. Carlisle SOA had a bad day picking up just two points and find themselves propping up the table, a position they are unaccustomed to.

Divisions 3 & 4 was played on 13th October. In the ten fixtures there were twelve 0-0 draws. Only three goals were scored in Divison 1 from the ten fixtures. Manchester Corinthians Whites, in fourth spot in September, are now top of the table just ahead of Salcom on goal difference. Salcom were propping up the table in September on two points but they had a good day today gaining another eight points.

Purple Panthers are third, dropping from top spot in September after gaining just three points today. Rochdale Striders and Garstang also picked up the same amount of points and drop from second spot to fourth and third to bottom respectively. All teams in third to fifth positions have the same number of points and the same goal difference.

Division 5 was played on 19th October. Nine goals were scored in the six fixtures. All places remain the same in this division. Ribble Valley’s two point lead over Bolton Wanderers Whites in September was reduced to one point today. Ribble picked up four points while the Wanderers gained five points.

Third placed Wakefield Wanderers Whites added four points to their September two, while bottom placed Bury Relics Blues took three points. The gap between Wakefield and Bury is now two points but with two sessions remaining who knows what the final outcome will be.

Divisions 1 and 2 were played on 20th October. Unusually sixteen goals were scored in the ten fixtures in Division 1 and twelve scored in Division 2.

In Division 1 Club Kingsmaid added another ten points to their September ten and now have a seven point lead over second placed Bury Relics who gained seven points today. Preston North End Senior Whites move up to third spot with six points in the bag today.

In Division 2 Bolton Arena won all of their four fixtures, scoring half of the goals scored in that division today. They now top the table with a two point advantage over September leaders Blackpool FC Senior Seasiders. The Seasiders, with a five point lead at the top of the table in September drop to second spot after only managing to gain five points today, despite playing well and having numerous chances to score. 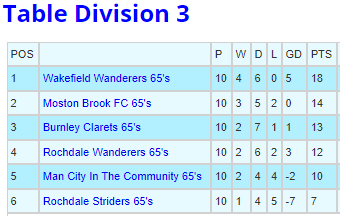 Division 3 was played on 27th October. All the top three positions were changed today. Wakefield Wanderers, in second spot two points behind Burnley Clarets in September, are now top of the table with a four point lead over now second placed Moston Brook FC. Wakefield grabbed eleven points today and deservedly so as they play walking football in the correct manner and have always been a credit to the GMWFL.

Moston picked up seven points while the Clarets drop to third spot after gaining just four points. In fourth remain the improving Rochdale Wanderers gaining another six points to their September six. Fifth and six spots change with bottom placed Man City In The Community having a good day with eight points added to their September two. Rochdale Striders could only manage one point today and are in bottom place, three points adrift of Man City.

Division 1 was played on 5th October. In Division 1 Bury Relics had a good day and top the table on twelve points, adding six to their September six. Close behind in second spot are Rochdale AFC Strollers on nine points, much improved after having poor results in September, where they were third on two points.

The biggest surprise of the day was with September leaders Tameside Striders Blues only picking up one point and dropping to third spot. Blackpool FC Senior Seasiders remain in bottom spot, although they did gain three points to add to their September one.

Division 2 was played on 12th October. Manchester Corinthians extended their September five point lead to eight points and already look to be the team gaining promotion. Salcom jump from third to second spot, one point ahead of Preston North End Senior Whites. Salcom picking up four points and Preston three.

Man City In The Community remain in bottom spot on one point. I may be wrong but they seem to have lost a few players, which would explain their lack of points.

Divisions 3 was played on 26th October. Only one goal was scored in the six fixtures today and that was by Bolton Arena Cardinals. The Cardinals with five points today swap the top spot with Tameside Striders Stripes. They now have a one point lead over the Tameside team.

The other Tameside team the Greens remain in third spot on seven points. Moston Brook FC, with no points from their September session added three today and remain in bottom spot four points behind the Greens.