The first Manchester Walking Football Over 70 Cup Tournament was played at the Heywood Sports Village on 31st May 2018 and some very skilful ageing footballers were on show. With the younger generation showing less and less interest in traditional amateur league football, these guys cannot get enough of bringing back their youth in a sport they still love. Long may it and themselves last.

A special mention must be made of two eighty two year olds who turned out for the Rochdale Blues and Tameside Senior Striders, Don Kerley and Bernard Roddy respectively. Well done ‘lads’, I hope I am still here at that age, never mind kicking a ball about.

Nine teams took part in this Manchester Walking Football Over 70 Cup Tournament and some travelled a fair distance to compete. Our usual over 60’s and 65’s league members, AFC Blackpool Senior Seasiders and Wakefield Wanderers were joined by Widnes WFC, Huddersfield Town and Birmingham WFC who made the long journey to Heywood.

Local teams, Bury Relics, Rochdale Striders and Strollers (renamed Rochdale Blues and Reds for this Manchester Walking Football Over 70 Cup Tournament) and Tameside Senior Striders made up the nine teams. Group A consisted of four teams and Group B five teams. We were fortunate with the weather, which despite a short drizzle, was generally warm and muggy.

In Group A both the Rochdale teams looked strong, as did the Blackpool side, all gaining five points from the three games played in that group. 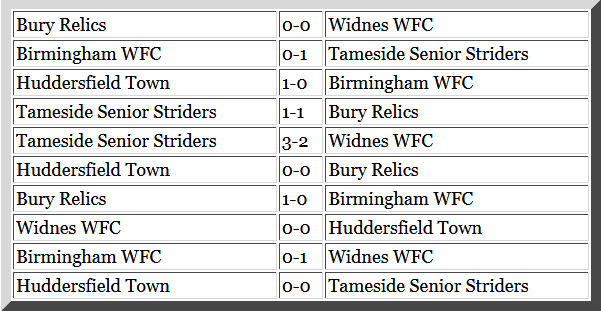 In Group B not a lot separated the top four teams but Tameside Senior Striders and Huddersfield Town both looked impressive. The Striders had my old team mate Dave Partington captaining the side and a great job he made of it, with some excellent defensive and midfield work. The Huddersfield lads passed the ball well and made space but lacked firepower upfront. They did play some attractive football nevertheless.

Rochdale Reds topped Group A on goal difference. AFC Blackpool Senior Seasiders and Rochdale Blues tied for runners up spot both with the same goal difference. All three teams finished on five points from a win and two draws each. In the resulting penalty shootout the Rochdale side won 2-1 to go through to the semi finals. Unfortunately, it wasn’t a good day for Wakefield Wanderers who finished bottom of the table with three losses.

In Group B only three points separated the top four teams. Tameside Senior Striders finished top with eight points from two wins and two draws. Bury Relics and Huddersfield Town both had six points from a win and three draws each and in the penalty shootout Huddersfield came through 1-0.

Widnes WFC came fourth on five points and were involved in the highest scoring game of the day in a five goal feast with Tameside Senior Striders. Birmingham WFC finished bottom of the table with four losses but seemed to have enjoyed the day despite the travelling involved. Hopefully we will see them in the November Over 70’s Cup Tournament. Thanks for joining us lads, your entry is appreciated.

It has to be said that there were some woeful penalty attempts in these runners up penalty shootouts, with some players still not able to grasp the ‘one step’ rule.

The first semi final saw the winners of Group A, Rochdale Reds playing the runners up of Group B, Huddersfield Town. The Yorkshire side dominated in this encounter but despite many shots on target were foiled by the excellent Ron Blakeley in the Red’s goal. As sometimes happens against the run of play, the Rochdale side, playing some quick passing and movement, found Steve Colesby unmarked and able to fire a shot into the Huddersfield net to give them a 1-0 victory and a place in the final.

The second semi final was more evenly matched with both the winners of Group B, Tameside Senior Striders and the runners up of Group A, Rochdale Blues playing some great attacking football. The game looked set to go to a penalty shootout but a fine shot from Tameside’s Barry Smith gave the Striders a place in the final with a 1-0 victory.

So it was to be a local teams final in this Manchester Walking Football Over 70 Cup Tournament with the Striders taking on the Rochdale Reds, (a mixture of Rochdale AFC Strollers and Rochdale Striders, the same as the Rochdale Blues team). This was the only game I watched for the full fifteen minutes and to my mind tactics won the day for the Reds.

Without a recognised striker in their ranks, the Rochdale side played three at the back in an attempt to foil the Tameside goal scoring threat. This worked a treat for Rochdale and with Ron Blakeley in goal for them it would have taken an exceptional strike to beat him.

The play was quite evenly matched, with Bill Charlton always available in a good position to take the ball from his Rochdale team mates. By this time players were visibly tiring in the heat as the temperature rose. The game finished goalless, which suited the Rochdale side more than it did the Tameside team. With the aforementioned Ron Blakeley in goal for the Reds, my money was on them in the resulting penalty shootout, as it would take some really good penalty kicks to score against him.

The Striders took the first penalty which was kicked over the bar by Barry Smith. The Red’s Bill Charlton tucked the ball neatly into the bottom corner of the Strider’s net to give keeper Gordon Nixon no chance and a 1-0 lead for the Reds. Next up for the Striders was Colin Fielding and his shot was well saved by the Red’s keeper Ron.

Another successful penalty by the Reds would give them the cup. Steve Colesby stepped up and scored with a well taken shot but was correctly adjudged to have taken more than one step, so the penalty had to be retaken. His second attempt was well saved by the Strider’s keeper, so it was still all to play for.

This was the Striders final penalty attempt and a miss or save would mean it was the Red’s cup. Terry Harrison was the Strider’s taker and once again Ron Blakeley made a fine save that meant despite playing some fine football on the day Tameside Striders would be runners up.

Congratulations to the Rochdale Reds on a 1-0 penalty shootout win which made them the first Manchester Walking Football Over 70 Cup Tournament winners. Also of course to all the teams who took part in what was a very successful day of walking football for the older players. As expected, physicality was at a minimum and running was generally limited to a few offences. It seems the older the competitor, the more sensible they become.

My player of the tournament was Rochdale Red’s Bill Charlton, he makes walking football look so easy, as it should be. Always finding space, he lays off the ball with precision, never runs, isn’t physical and rarely makes a bad pass.

A special thanks to Barry Woodburn for his registration duties, assisted by Matt Howells, and for overseeing the after tournament buffet and raffle. Without the input of people like these we couldn’t hope to make the day a success. 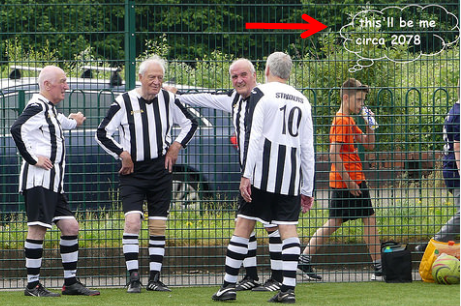 Some fine photographs, courtesy of Tameside Senior Strider’s manager Alan Richards can be found on this LINK. I particularly like this one with the humerus balloon caption.

The next Over 70’s Cup Tournament will take place on Thursday 8th November and it is almost certain that we will start an over 70’s league in 2019. Our next Cup Tournament is the Martin Dawson Memorial Trophy for the over 60’s on Sunday 16th September. Let’s hope we get better weather than we did in last year’s tournament.

Finally, my sincere apologies to the Bury Relics team. Our rules state that if points and goal difference are the same, the number of goals scored are to be taken into account. With this factor the Relics should have been named runners up of Group B instead of having a penalty shootout with Huddersfield Town, which they eventually lost 1-0. The Bury side scored two goals in the group stage to Huddersfield’s one. A great bunch of lads but I am sure they will deservedly never let me forget this mistake on my part.

Comments welcome below if you enjoyed this Manchester Walking Football Over 70 Cup Tournament, or any criticism if you didn’t.