The first session of the 60s Autumn league, Divisions 1 & 2 were played on the 8th of the month. There are some very strong sides in Division 1 and no easy fixtures for any of the teams. Wakefield Wanderers had a good start and head the table, two points ahead of Club Kingsmaid, who in turn are two points ahead of Manchester Corinthians Reds. Rochdale AFC Strollers are in fourth spot and newly promoted Fleetwood Town Flyers are bottom with no points collected on the day.

Divisions 3 & 4 kicked off on 15th September. In Division 3 three teams are joint top, all on six points and with the same goal difference, Purple Panthers, Rochdale Striders and Garstang WFC. Two points behind in fourth spot are Manchester Corinthians Whites and two points behind the Whites are Salcom in bottom spot.

In Division 4 Moston Brook FC head the table on eight points. Joint second and third are Maccabi Old Codgers and Winstanley Walkers FC both on six points and the same goal difference. Fourth spot goes to Burnley Clarets on four points, while bottom placed Roach Dynamos are on two points.

Division 5 was played on 21st September. Some excellent passing football was played by all teams today in this division. Ribble Valley top the table with seven points, closely followed by new team Bolton Wanderers Whites, who were strangely playing in blue, on five points.

Third spot goes to Wakefield Wanderers Whites, actually playing in White, who looked better than their two point haul and don’t be surprised to see them having better results in the next few months. Bury Relics Blues had a disappointing day, picking up only one point from their three fixtures. Who will top the table in Division 5 in December is any bodies guess.

Divisions 1 & 2 were played on 22nd September. Newly promoted Club Kingsmaid head Division 1 with ten points and a four point lead over second placed Bury Relics. Rochdale AFC Strollers are in third spot, a point behind the Relics. Joint fourth and fifth are Preston North End Senior Whites and Spring Champions Manchester Corinthians Reds. Both teams could only manage to collect two points today. The day could have been even worse for the Corinthians, if it hadn’t been for their keeper, Dave Hunter, who must be one of the top three keepers in the league now.

Blackpool FC Senior Seasiders had a great start in Division 2, winning all their fixtures and have a five point lead at the top. Bolton Arena are second on seven points, followed by Purple Panthers on four points. In fourth place on three points are Fleetwood Town Flyers a point ahead of bottom placed Salcom. 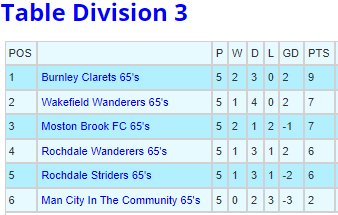 Also on seven points in third spot are Moston Brook FC but with an inferior goal difference to the Yorkshire side. The two Rochdale teams, the Wanderers and Striders take fourth and fifth spots respectively, the Wanderers edging the Striders on goal difference. Man City In The Community are in bottom place, picking up just two points and with no goals scored for today.

The 70s league now has 12 teams involved, 4 teams in each of the Divisions 1 to 3. Manchester Senior Citizens are now renamed Man City In The Community. The two new teams joining this age group are Bolton Arena Cardinals and Tameside Striders Greens, the third team fielded by the Tameside club in this age category.

Division 1 was played on 7th September. Newly promoted Tameside Striders Blues had a great start and top the table, one point ahead of the Spring Champions Bury Relics. They also beat the Relics 2-0. Rochdale AFC Strollers had one of their worst ever starts to a season, picking up just two points and suffering a 4-0 defeat to Bury Relics. Blackpool FC Senior Seasiders gained one point and are bottom of the table.

Tameside Striders Blues are also to be applauded for once again showing great sportsmanship in their fixture with Blackpool FC Senior Seasiders. The Seasiders were down to five players following an injury and the Blues fielded the same numbers, well done lads.

Division 2 was played on 14th September. Manchester Corinthians had a good start winning all their three fixtures and top the table on nine points, five ahead of their nearest rivals Preston North End Senior Whites who are in second spot on four points.

Salcom are in third place, also on four points but with an inferior goal difference to the Preston side. Man City In The Community prop up Division 2 with no points gained on the day and shipping five goals without reply.

Third spot goes to yet another Tameside team, Tameside Striders Greens on four points. Moston Brook FC are in bottom spot with no points collected today.