Manchester Walking Football 65s June 2019 was the fourth and final session of the Spring League. Twenty nine goals were scored, nine each in Divisions 1 and 2, and eleven in Division 3.

On a drizzly day, there were some critical fixtures to decide who would be the champions of each division and who would be relegated.

In Division 1 Bury Relics had a four point lead over Rochdale AFC Strollers after the May session. The Relics could only manage four 0-0 draws to take their points total to twenty five. The Strollers had a better day with two wins and two 0-0 draws to match the Relics twenty five points. Unfortunately for the Rochdale team, Bury won the division with a better goal difference of two goals.

In Divison 2 after the May session, only one point separated the top three, so it was all to play for. Man City and AFC Blackpool Senior Seasiders were both on seventeen points, with Third Space Seniors a point behind.

Man City forged ahead to win the division with three wins and a draw. The Seasiders lost their first fixture against the City side, which wasn’t a good start for them. They completed their fixtures with a win, a draw and another loss to finally finish in second spot six points behind City, who find themselves in Division 1 in the Autumn season.

Joint third and fourth spots were shared by Preston NE SW and Third Space Seniors. Preston gained eight points with two wins and two draws, while Third Space could only gain another three points from three 0-0 draws and the one loss.

Relegated to Division 3 in the Autumn season are Rochdale Striders, who only picked up the one point from one draw and three defeats.

Division 3 also wasn’t done and dusted after the May session, with only four points separating the leaders Manchester Corinthians and second placed Chadderton FC WF. In the event the Corinthians ended up winning the division by a ten point margin with four wins and scoring seven of the eleven goals scored in the division.

Chadderton managed two wins and two defeats, themselves having a ten point margin over third placed Wakefield Wanderers. The Wanderers had one win, two draws and a loss. Fourth spot went to Maccabi Old Codgers, finishing two points behind Wakefield. The Codgers could only manage two points in this session with two 0-0 draws and two losses.

Bottom spot went to Rochdale Wanderers, without a win all season. They had two 0-0 draws and two defeats. 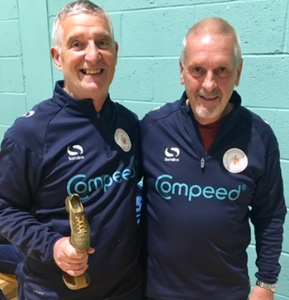 Manchester Corinthians Ray Richards won the Golden Boot award with seven goals, his third such award since he joined the league.

Thanks to our group of referees, who did us proud once again. Also our fixtures secretary Steve Colesby, registration secretary Barry Woodburn and of course not forgetting Paul Gardner who deals with all the finance, venue hire and refreshments.

With other teams wishing to join the 65s league it will probably be four divisions in September and also four Thursday fixture dates.

All the results and tables can be found HERE.